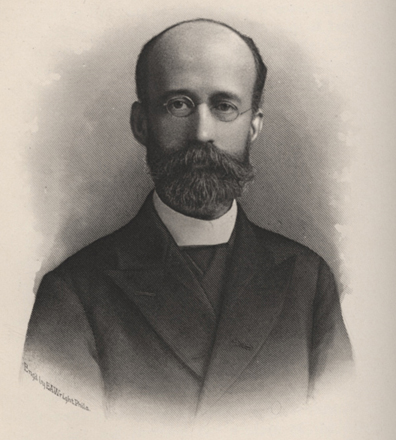 John Henry Clewell, Moravian minister and college president, was born in the Moravian community of Salem, the son of John David Clewell, a bookbinder and shoemaker, and Dorothea Matilda Shultz. He was educated at the Theological Seminary in Bethlehem, Pa., returning to Salem in July 1877 to assume the position of assistant teacher at the Boys' School. That year he organized a large and successful Bible class for young men. The next year he left Salem to further his studies at Union Theological Seminary in New York City. By 1882 he was pastor at Uhrichsville, Ohio, where he was praised for his energetic work in establishing a church in nearby Port Washington.

On 1 June 1884, Clewell was recalled to Salem as assistant principal of the Salem Female Academy, under Edward Rondthaler. Four years later, in May 1888, Clewell became principal. Under his direction the school prospered, and by 1892 there were over three hundred girls in attendance. During his principalship, electricity and modern plumbing were installed, and the new industrial department (forerunner of home economics) and department of natural science were introduced, in 1889 and 1902, respectively. In 1907 the Salem Female Academy became Salem Academy and College.

In addition to his duties as principal, Clewell was also very active in church and community affairs. In 1889 he served as pastor for Salem in the temporary absence of the pastor. He traveled extensively in this country and Europe. In 1898 he was elected by the district as an alternate to the General Synod of the Unitas Fratrum ; he was thus in Europe from May until the end of June 1899. Clewell was given the degree of Ph.D. by the Moravian College in Bethlehem in 1900. In 1901 he served as curator for the Wachovia Historical and Archival Memorabilia, putting the material into easily accessible order and taking action toward the preservation of these historical records.

Clewell wrote articles for a number of publications and in 1902 published The History of Wachovia in North Carolina. From 1904 to 1908 he was editor of the monthly Wachovia Moravian, a paper in operation from 1893 to 1930. In 1906 he was appointed temporary president of the board of elders in the pastor's absence.

After twenty-two years as president of the Salem Academy and College, Clewell resigned on 7 May 1909 to take a similar position in Bethlehem, Pa., at the Moravian Seminary for Young Ladies. Under his leadership that school was greatly enlarged and improved. A new gymnasium was built in 1912, and college level courses were added to the curriculum. A charter amendment in 1913 changed the name to Moravian Seminary and College for Women at Bethlehem.

Clewell was married to Alice Wolle, and they had four sons. He died in Bethlehem.

John Henry Clewell, The History of Wachovia in North Carolina (1902).