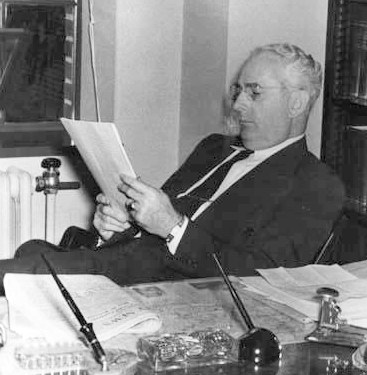 David Leroy Corbitt, archivist and historical editor, was born in Chicod Township, Pitt County, the second of three children and only son of James Samuel and Mary Virginia Parkerson Corbitt. His father, a part-time Primitive Baptist preacher, was a farmer and small businessman in Pitt County.

"Roy" Corbitt as a child worked on the farm; at the age of eleven he took the first of several temporary jobs, this one in a textile mill in Greenville. Successive illnesses—typhoid fever, smallpox, and rheumatism—struck him by the time he was sixteen years of age. From the latter, subsequently diagnosed as arthritis, he never recovered; after three weeks in Johns Hopkins Hospital in Baltimore, he was sent home in 1912 with little hope for life. But, despite the crippling effects of the disease, he learned to use a wheelchair and later a cane and crutch. Largely restricted to his home, he spent most of his time reading, sewing, embroidering, and whittling. A carelessly lighted firecracker resulted in the loss of sight in his right eye. These misfortunes delayed his graduation from high school until he was twenty-four years old. He then took a job in the Greenville mayor's office, where for a year he served as justice of the peace and notary public.

On 13 Mar. 1920, Corbitt's mother died, leaving him in the care of his father and younger sister, Mary. Tragedy struck again in August when Mary died. Unable even to put on his socks and tie his shoes, Leroy was taken in by his uncle, Charles Parkerson.

During his thirty-seven years with the state's historical agency, Corbitt contributed significantly to the expansion of both the archival and the publications programs. In addition to his administrative work on and editorial supervision over the North Carolina Historical Review and many documentary volumes and pamphlets, he compiled and edited nine volumes of public addresses and releases of North Carolina governors from Morrison through Umstead. His most widely used production, however, was The Formation of the North Carolina Counties, 1663–1943 (1950). He wrote numerous articles and book reviews and also edited Calendars of Manuscript Collections [in the State Archives] (1926); Handbook of County Records Deposited with the North Carolina Historical Commission (1925); Explorations, Descriptions, and Attempted Settlements of Carolina, 1584–1590 (1948, 1953); Secretaries of the United States Navy: Brief Sketches of Five North Carolinians (1948); and Pictures of the Civil War Period in North Carolina (1958).

Corbitt was a popular speaker on state and local history. On behalf of the North Carolina Literary and Historical Association, he assisted in organizing historical societies in thirty-eight counties and was a frequent participant in their meetings. In 1958–59 he was president of the Historical Society of North Carolina and vice-president of the North Carolina Society of County and Local Historians. He was elected an honorary life member of the Literary and Historical Association and a fellow of the Society of American Archivists, and he was an active participant in other professional organizations.

Following his retirement from the Department of Archives and History in 1961, Corbitt continued for two years as a part-time consultant, working primarily on records relating to the Granville grant. In the 1965 legislative session he was librarian for the General Assembly.

In an unpublished autobiography completed in 1966, Corbitt wrote, "A person who does not have difficulties or handicaps to overcome does not fully understand the real meaning of living a worthwhile life." He overcame his difficulties, and few persons of the twentieth century have contributed more to the preservation and dissemination of North Carolina history.

Corbitt married Alma Jordan of Chatham County on 10 Oct. 1927. They had no children but for many years gave a home to his niece, Dorothy Cox, who married Dr. Pierre Elias Awad of Egypt. Corbitt was buried in Montlawn Memorial Park in Raleigh.

"In Memoriam: David Leroy Corbitt," Thirty-Second Biennial Report of the State Department of Archives and History, 1966–68.