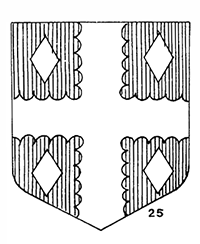 Ananias Dare, was one of twelve "Assistants" in the government of the Citie of Ralegh in Virginia and a member of the "Lost Colony" of 1587 that arrived at Roanoke Island in July. He was described in 1586 as a tiler and bricklayer but the next year, in a document drawn up by Sir Walter Raleigh, he was referred to as a gentleman "late of London." His wife was Eleanor White, daughter of Governor John White of the 1587 colony, and Dare's name appears third in the list of colonists. Nothing further is recorded of the members of the colony after White sailed for England on 27 August. Dare was survived in England by a son, John Dare, to whom his property was awarded by court action in 1597. Robert Satchfeild in 1594 was named as Ananias Dare's next of kin while John Nokes in 1597 appears as a blood kinsman. The Dare family likely resided in the Parish of St. Bride's, Fleet Street, London, although the name also appears in records of other London parishes of the sixteenth and seventeenth centuries as well as in Devon.

What did John White's

What did John White's assistants do? What was the purpose of the assistant title? I'm writing a fiction book regarding the lost colony and I'm trying to achieve some modicum of historical accuracy. Any help that you can provide would be greatly appreciated.

Thank you for asking this excellent question and for visiting NCpedia! I am going to forward your inquiry over to our library's Reference Team at slnc.reference@ncdcr.gov so that they can look into this further. A member of our staff will be in contact with you via e-mail soon.

Question: I'm a Dare. My

Question: I'm a Dare. My father used to tease me we were related to Virginia Dare. He also poo-pooed all the silly theories about how Roanoke was abandoned, saying they sought out other land to inhabit and were absorbed by the local tribes. Anyway, what became of John Dare who stayed in England?

i am also interested in what happened to john dare, i also heard Virginia Dares parents were looking at plants to cure syphilis. is this true?

Thank you for your comment and for visiting NCpedia! I am forwarding your inquiries over to our library's Reference Team so that they can assist you further. A member of our staff will be reaching out to you via e-mail soon.

Thank you for visiting NCpedia and asking such an interesting question. I will send your question about John Dare to the Reference Team at slnc.reference@ncdcr.gov

I hope that they can help.