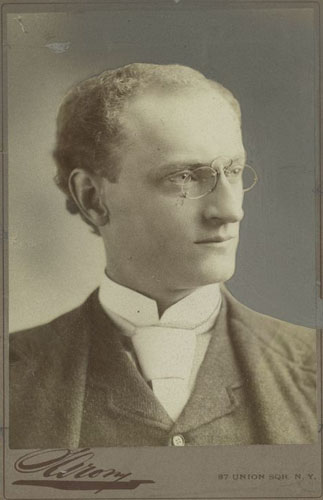 Henry Churchill deMille, playwright, was the son of William Edward and Margaret Blount Hoyt deMille, both of Washington, N.C., where young deMille was born. During the Civil War his father joined the Confederate Army and the family refugeed to Greenville. He rapidly learned the difficulties and inconveniences of life in wartime, including early education under his own mother. When peace came the family returned home, but under straitened economic conditions for them and the community. In 1867 deMille made a trip to New York to visit his grandfather, Thomas Arnold deMille, who persuaded the boy's parents to let him stay in the North. That September, at age fourteen, he entered Adelphi Academy, in Brooklyn, which was to become a strong motivating force in his life.

In 1871 deMille entered Columbia College from which he received the A.B. and A.M. degrees. Following graduation in 1875, he taught at Lockwood's Academy, then at Columbia Grammar School. A devout member of the Episcopal church, he was a lay reader at St. Stephen's, Brooklyn. In 1878 he was accepted as a candidate for Holy Orders in the Diocese of Long Island, though he was never ordained. Instead, he turned to the theater. His first assignment was as a playreader on the staff of the Madison Square Theatre. Through Daniel Frohman, the stage manager, he met David Belasco, with whom he developed a close friendship. They became partners after production of The Main Line (written in collaboration with Charles Barnard) at the Lyceum Theatre on 18 Sept. 1886.

By this time deMille had acquired a summer home at Echo Lake, N.J., where for the next five years Belasco practically became a member of the family. The first of their collaborations was The Wife, produced at the Lyceum on 1 Nov. 1887. This was followed by Lord Chumley, produced 21 Aug. 1888, written especially for E. H. Sothern to give

that actor a character somewhat like the Lord Dundreary his father had made famous, and The Charity Ball, produced 19 Nov. 1889. They were among the most popular plays of the period and acted for several successive seasons throughout the country under the management of Daniel Frohman, at whose Lyceum Theatre they had first been produced. The two productions gave deMille a national reputation.

Because he saw life mainly in terms of the theater, deMille's plays were artificial in structure, written in the conventional manner of the society drama of the day, with alternate layers of intrigue/drama force and comedy. Except for occasional performances by local stock companies their popularity did not continue beyond the early years of the twentieth century. The last of the Belasco-deMille productions, Men and Women, opened on 21 Oct. 1890 and ran until the end of March 1891. DeMille had come to feel that his and Belasco's professional interests no longer coincided, though their friendship continued. DeMille was becoming more interested in social and economic problems, reflected in his last play The Lost Paradise, produced first in Chicago on 17 Aug. 1891. He was greatly influenced by the philosophy of his friend, Henry George, the noted "Single-Taxer." He started work on The Promised Land, but it was never finished.

In 1876 deMille married Matilda Beatrice Samuel in St. Luke's Church, Brooklyn. Of their three children, a daughter died in early childhood and two sons, William C. and Cecil B. deMille, reached positions of prominence in the motion picture world. DeMille was an Episcopalian and a Democrat. He died suddenly of typhoid fever at his home in Pompton, N.J. Some years later his ashes were interred in the grave of his mother in Washington, N.C.