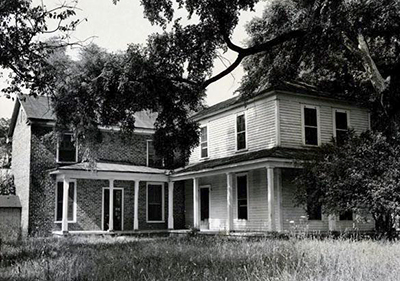 Joseph Dickson, congressman, planter, and military leader, was born in Chester County, Pa., a few miles north of Wilmington, Del. About 1755 he moved with his family to Rowan County, N.C., near Salisbury, where he continued his schooling begun in Pennsylvania. He read law, was admitted to the North Carolina bar, and practiced in Rowan County. He early assumed responsibility for the family's farm and became widely known throughout the area as a successful cotton and tobacco planter.

During the restless days prior to the American Revolution Dickson filled many positions of leadership on behalf of the colony. In 1775, at the age of thirty, he was a member of the Rowan County Committee of Safety, a group designed for negotiation as well as defense. Before the end of the year he accepted a commission as commanding captain in the Continental Army. In 1780 he served as a major of the "Lincoln County Men," a unit that distinguished itself at the Battle of Kings Mountain under the command of Colonel Charles McDowell. One year later he won praise for his bravery and military acumen in opposing the invasion of Lord Charles Cornwallis into North Carolina. For that service he was commissioned colonel; his continuing military leadership earned him the rank of brigadier general in the militia.

Having established his residence in Lincoln County, Dickson was elected clerk of the Lincoln County court, a position he held for several years until he was elected to the North Carolina Senate where he served four terms from 1788 to 1795. There he revealed a special interest in education, serving on several committees and the legislative commission that established The University of North Carolina. He was named a trustee in the William R. Davie bill to establish the university, dated 12 Nov. 1789. Subsequently he was listed in the charter of 11 Dec. 1789, and was consistently present at meetings of the trustees through 1796. In the latter year he was a member of the small Committee on Visitation.

In 1793 Dickson was reported to have "occupied property in Chatham County" that later belonged to the university. Whether he simply lived there for a time or owned the property is not clear. Further, in the university records for 7 Dec. 1796, he is listed as representing the "Morgan District" on the Committee on Visitation while someone else represented the Rowan District. There is no evidence that Dickson lived in other than Rowan and Lincoln counties until he moved to Tennessee in 1803. Following his retirement from the North Carolina senate he returned to his Lincoln County home and remained active in public affairs, especially politics. Three years later he was a successful Federalist candidate for election to the U.S. House of Representatives where he served during the Sixth session from 1799 to 1801.

Political observers have long credited Dickson with valuable yeoman service on behalf of Thomas Jefferson in his contest with Aaron Burr in 1800 for the presidency of the United States. The regular election ended in a tie: seventy-three votes each for Jefferson and Burr. That threw the election into the House of Representatives where Jefferson was finally chosen president on the thirty-sixth ballot. It was during that prolonged floor fight that Dickson raised his voice and exerted his influence on Jefferson's behalf. Aaron Burr became vice-president and served throughout Jefferson's first term.

In 1764 Dickson married Margaret McEwen, probably a resident of Rowan County. She was the daughter of James and Isabella Miller McEwen. The Dicksons had nine children: James, Elizabeth, Isabella, John, Joseph, Robert, William, Ezekial, and Margaret, all born in North Carolina.

In 1803 Dickson left North Carolina and settled in Tennessee. There he became a noted and prosperous planter in Davidson County (the part now known as Rutherford County), and continued his law practice in the town of Murfreesboro. He also was an active churchman and is credited with the organization in 1812 of the Presbyterian church in Murfreesboro. He was one of the founders of the Murfreesboro Lodge, Ancient, Free and Accepted Masons.

Politics continued to interest Dickson and in 1806 he was a successful candidate for election to the Tennessee legislature. He served two terms from 1807 to 1811; during his last term he was speaker of the house. The remaining fourteen years of his life were spent on his farm in Rutherford County, Tenn., where he died and was buried in the family cemetery on his plantation northeast of Murfreesboro.