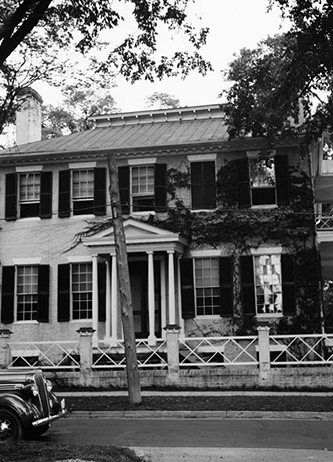 Richard Dillard Dixon, businessman, lawyer, clerk of court and superior court judge, and judge of the United States Military Tribunals, was born in Edenton, a descendant of distinguished eastern North Carolina and Virginia families. His father was Minton H. Dixon, the son of George Beverly Dixon, who moved to Edenton from Warrenton, Va. For more than a quarter of a century Minton Dixon was a leading merchant; for fifteen years he served as a justice of the peace and, from 1913 to 1918, as the first judge of the recorder's court in Chowan County. Richard Dillard Dixon's mother was Sally Dillard, the daughter of Dr. Richard Dillard, Sr., a surgeon in the Civil War, and of Mary Louisa Beverly Cross, the granddaughter of Richard Brownrigg.

Dixon's birthplace was Beverly Hall, a thirteen-room brick house erected in 1810 by Joseph and John Blount as a combined bank and living quarters for its staff. The institution prospered from its inception until 1835, when Andrew Jackson's withdrawal of federal funds from all banks necessitated its liquidation. Since that time the building has been used solely as a residence; in 1879 it was acquired by Richard Dillard, Sr., whose plantation home, Wingfield, had been burned during a Civil War skirmish. This historic house became the permanent home of Richard Dillard Dixon. As a child, he spent each summer in Nags Head and in Warrenton, Va. He received his early education at the Edenton Academy and in 1904 completed its program of study. He then attended Trinity Military School, at Chocowinity, and was graduated in 1906. The same year he entered The University of North Carolina; financial constraints caused him to withdraw in 1909 before he completed work toward a degree.

Dixon's first position was that of assistant in the Edenton graded school. At the end of the term he accepted employment with the brokerage firm of Charles Syer and Company, Norfolk, Va., beginning as a shipping clerk. He soon worked his way up to branch office manager and eventually became both sales manager and part owner of the business. He remained with the company until 1916, when his father's ill health made his return to Edenton advisable.

On 25 July 1917 Dixon volunteered for service in World War I, enlisting in New Bern as a private. He was assigned to Battery A of the 113th Field Artillery, 30th Division, then transferred to Camp Sevier, Greenville, S.C.; he was commissioned second lieutenant on 5 August and promoted to first lieutenant in February 1918. He was sent overseas and landed in Brest, France, on 20 May 1918. He participated in the St. Mihiel and Meuse-Argonne offensives, the engagements in the Troyon sector, and the Woevre offensive, opposite Metz. After the armistice, he went into Germany with the Army of Occupation and for thirty days was billeted at Colmar-Berg, Luxembourg. In February 1919 he was promoted to captain. His final station was in the Le Mans sector, where he remained until 25 Mar. 1919 when his battery was ordered home. He was honorably discharged on 15 Apr. 1919 at Camp Jackson, Columbia, S.C.

After he returned to civilian life, Dixon began to study law under state Senator Charles S. Vann of Edenton; in 1921 he continued his studies under Needham Y. Gulley at Wake Forest College. In November 1922 he was elected clerk of the superior court of Chowan County and in December was admitted to the bar. For nineteen years he served not only as clerk of superior court but also as clerk of recorder's court, judge of juvenile court, and county accountant. In 1941 he gave up his various duties to accept an appointment by Governor J. Melville Broughton as a special superior court judge, a position he held until 1945.

In 1946 Dixon went to Nuremberg, Germany, to assist in the war crime trials held under the authority of the Allied Council Law No. 10. In May 1947, at the recommendation of General Lucius D. Clay, he was appointed by President Harry S Truman to serve as an alternate to any of the tribunals. He presided over four of the trials: Case No. 1, U.S. v. Karl Brandt et al. (Medical Case); Case No. 2, U.S. v. Erhard Milch (Milch Case); Case No. 5, U.S. v. Friedrich Flick et al. (Flick Case); and Case No. 9, U.S. v. Otto Ohlensdorf et al. (Einsatzgruppen Case). He returned to the United States in 1948 and spent the remaining years of his life as an attorney in Edenton.

On 30 Apr. 1923 Dixon married Louise Manning Badham, also a member of widely known North Carolina families; they had one son, Richard Dillard Dixon, Jr. The elder Dixon was a member of St. Paul's Episcopal Church, Edenton, where he served as a vestryman at various times during a thirty-year period. In politics, he was always loyal to the Democratic party. He was a member of the Tryon Palace Commission from its organization on 6 Nov. 1945 until his death. He was also a member of Delta Kappa Epsilon, the North Carolina Literary and Historical Association, the North Carolina Society for the Preservation of Antiquities, the Edenton Chamber of Commerce, Rotary Club, and Edward G. Bond Post No. 40 of the American Legion. His primary interests were history and gardening.

He died at Beverly Hall and was buried in the churchyard of St. Paul's Episcopal Church. Two portraits, one unsigned and the other by Herr Birkman, of Nuremberg, are in the possession of his family.

The records for the Medical

The records for the Medical Trial and the Milch Trial do not list Judge Dixon as a member of either tribunal( i.e. the Trials of War Criminals before the Nuernberg Military Tribunals series does not so list him).

Thank you for visiting NCpedia and taking time to share these details and issues.  I will investigate an update to the entry.  In the meantime, your comments will stay with the entry for future visitors to consider as additional information.

According to the US

According to the US government's Trials of War Criminals Before the Nuernberg Military Tribunals (nicknamed the Green Series); Dixon was an alternate member in the Flick Case and a full member( but not the Presiding Judge) in the Einsatzgruppen Case