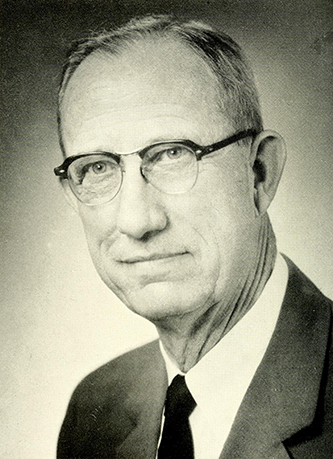 Philip Lovin Elliott, Sr., minister, educator, and college president, was born of Scottish and English ancestry in Wayside, Swain County, a former community in the Smoky Mountains now under the waters of Fontana Lake. His father, Isaac Bartley Elliott, a Confederate soldier and later farmer and merchant, fought in the Battle of Atlanta. At the age of eighteen, filled with a consuming desire for an education, Philip Elliott walked the twenty miles from Wayside to Robbinsville where he enrolled in a small Presbyterian mountain academy. In 1912 he went to Mars Hill, then a high school, to complete his preparation for college. While a student there, he was ordained to the Christian ministry. The young Reverend Mr. Elliott began his ministry by riding horseback once a month across Bald Mountain down into Flag Pond, Tenn., to preach to a small mountain Baptist congregation. From Mars Hill, he went to Wake Forest College in 1915 where he was graduated in 1919 as an outstanding student in English literature and journalism.

For forty years Elliott devoted himself to the work of his denomination, to teaching, and to college administration. His first teaching assignment was in a small green valley at Proctor where, at the time, the Ritter Lumber Company had a sawmill village. There in a one-room schoolhouse, made of rough boards, he taught a four-month subscription school at a salary of forty dollars a month. Following graduation from Wake Forest College, he went to Bakersville to take charge of Mitchell Collegiate Institute, one of a number of Baptist boarding schools at that time supported by the Southern Baptist Home Mission Board. Here, virtually under the shadow of Roan Mountain, he was principal, dean, business manager, and teacher in a school for three hundred boys and girls, many of whom were too poor to pay even the modest fees of the struggling mountain school. The next three years he gave to his ministry—as missionary pastor to Graham County (1920), as enlistment secretary of the North Carolina Baptist State Convention for all of western North Carolina (1921), and as pastor of the Cullowhee Baptist Church (1922). Nevertheless, in 1923 his strong commitment to Christian education led him to accept an appointment as dean and head of the English department at Mars Hill College.

The years between 1923 and 1930 were full ones for Professor Elliott. After receiving a master's degree in 1925 from The University of North Carolina, he was made vice-president of Mars Hill College. Two years later, taking a leave for more graduate study, he followed the eminent Renaissance scholar, Dr. Edwin A. Greenlaw, to Johns Hopkins University, where he worked from 1927 to 1928 with Professor Greenlaw and others on the Johns Hopkins Variorum Edition of the Works of Edmund Spenser. In 1930, he resigned his post at Mars Hill to become head of the English department at Western Carolina Teachers College (now Western Carolina University), a position he held for thirteen years.

It was, however, at Gardner-Webb College that he was to make his most enduring and significant contributions in higher education. Governor O. Max Gardner, on one occasion, called Boiling Springs Junior College a school that "refused to die." In 1942 two significant things occurred in the life of that institution: Governor Gardner began to devote his energies, time, and wealth to guiding and strengthening the school; and its name was changed to Gardner-Webb College. In July 1943, Elliott left Western Carolina Teachers College and went to Gardner-Webb as its president, bringing with him a community service concept of education that was destined to make it unusual among small liberal arts colleges. Under his direction Gardner-Webb became a member college of the North Carolina Baptist Convention, and the building of the modern campus was pushed forward. In his tenth report to the board of trustees in 1953, President Elliott reviewed the college's progress during the first decade of his administration. Total assets had increased sixfold, the operating fund had increased twelvefold, the endowment had increased thirtyfold, and the college was now fully accredited. Progress continued to characterize his administration until his death seven years later. However, Elliott did not regard the physical and financial growth of the college to be the most significant aspect of his presidency. Rather, he considered his crowning achievement to be the assembling at Gardner-Webb of a faculty that understood the needs of youth and was devoted to the serious business of teaching without which all else would be meaningless. In recognition of his educational leadership and achievement, he was awarded an honorary Ed.D. degree by Carson-Newman College in 1951 and the LL.D. degree by Wake Forest University in 1959.

On 27 Aug. 1918 Elliott married Etta Maurine Carringer of Robbinsville. Four children were born to the union: Ruth Eleanor, Diane Jayne, Philip Lovin, Jr., and Rachel Elizabeth. Elliott died of a heart attack in his office on the Gardner-Webb campus.