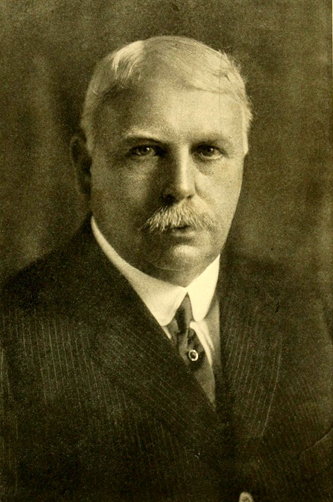 Isaac Edward Emerson, chemist, manufacturer, sportsman, and philanthropist, was born in Orange County, the son of Robert J. Emerson, a farmer, and his wife, Cornelia Lewis Hudson of Wake County. Because of the early death of his mother, Isaac and his brother, John W., moved into the home of their uncle and aunt, Mr. and Mrs. A. J. McDade, in the town of Chapel Hill. Emerson entered The University of North Carolina in 1876 and was graduated with a degree in chemistry in 1879. While a student, he was employed as an assistant in A. B. Roberson's drugstore on the corner of Franklin and Columbia streets. Shortly after graduating, Emerson married the former Mrs. Emily Askew Dunn, daughter of Colonel W. F. Askew of Raleigh. Mrs. Dunn was divorced from a previous marriage. In 1881 the Emersons moved to Baltimore, Md. There Emerson earned the fortune for which he was later known. From 1884 to 1889, he established several drugstores and at some time during this period developed the formula that he later patented as Bromo-Seltzer, a widely known headache remedy. To promote the remedy, he founded the Emerson Drug Company in 1891.

The commercial success of Bromo-Seltzer was due in large measure to Emerson's foresight in recognizing the growing importance of advertising. His product was advertised in many countries and in many languages, often by unusual devices. As his wealth increased, he turned from business activities to sports and social pursuits. He purchased several yachts including the Susquehanna, the Margaret, and the Queen Anne. These were used for hunting expeditions, social entertainment, and extensive world travel.

In 1894 Emerson organized the Maryland Naval Reserves, which he commanded from 1894 to 1901. During the Spanish-American War, he personally financed an entire naval squadron, was commissioned a lieutenant in the U.S. Navy, and was made assistant to the chief of the Auxiliary Naval Force. The Maryland Reserves elected him captain in 1900, and he was subsequently known as "Captain Emerson" or "Captain Ike."

Emerson's interest in sports resulted in the gift to The University of North Carolina of Emerson Stadium, the university's first athletic stadium. Donated in 1914, the structure served as the university's official stadium from 1916 until 1927, when Kenan Stadium was built. After many years' service for many sports, the stadium was demolished in 1971.

In 1911 Emerson was remarried to Anne Preston McCormack of Irvington, N.Y., having previously divorced his first wife. During his later years he lived at Brooklandwood, a handsome estate in the Green Spring Valley outside Baltimore, where he operated a model dairy and developed a herd of government-tested cattle. The original part of this home was built by John Carroll of Carrollton. Emerson died at Brooklandwood. He was survived by his second wife, two stepdaughters (Mrs. W. W. Keith and Mrs. James McVickar), and his only daughter, Mrs. Charles Amory.

Two oil portraits of Emerson hang in buildings on the campus of The University of North Carolina, Chapel Hill. One belongs to the Dialectic Literary Society of which Emerson was a member while a student at the university; the other is in Beard Hall, the School of Pharmacy.

I believe Mr. Emerson was

I believe Mr. Emerson was born in Chatham county instead of Orange.

Thank you for visiting this entry and suggesting this correction. We will look into this.

The records we've seen indicate that he was born in Chatham County and moved to Chapel Hill perhaps around age 10. An 1860 Census Record for the family lists them as living in Pittsboro when the infant Isaac was about 2 months old.

If you have any sources that you could share to help, that would be great.  Feel free to post back to this entry.