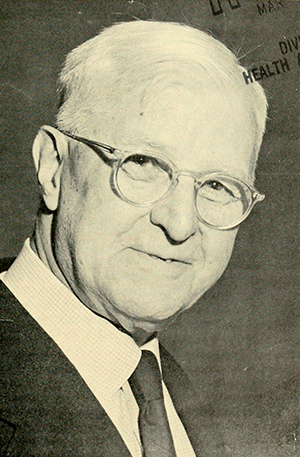 John Atkinson Ferrell, health director, was born in Clinton, the son of James Alexander and Cornelia Murphy Ferrell. After attending the local schools he entered The University of North Carolina where he was graduated with a B.S. degree in 1902. He then taught in the Sampson County schools, eventually becoming county superintendent. Ferrell reentered the university to study medicine but maintained his school superintendency by commuting by horse and buggy between Chapel Hill and Sampson County. On receiving his M.D. degree in 1907, he began to practice in Kenansville and for a short time was superintendent of the Duplin County Health Department. Thereafter public health became his lifework.

In 1910 Dr. Ferrell was appointed assistant secretary of the State Board of Health in charge of the campaign against hookworm disease inaugurated by the Rockefeller Sanitary Commission. His work in the control of hookworm and typhoid set an example in the public health field for the control of many other communicable diseases. In 1913 he was granted a doctor of public health degree from the Johns Hopkins University. Based on his accomplishments in his native state, he was named director of the Rockefeller Foundation's public health activities in the United States and in that capacity supervised the development of state and county health departments throughout the country. Later his responsibilities were extended to include Canada and Mexico. On his retirement in 1944, Ferrell held the post of regional director of the International Health Department of the Rockefeller Foundation. After leaving the Rockefeller Foundation, he was medical director of the John and Mary R. Markle Foundation for two years. He retired in 1946.

Ferrell's retirement was short-lived for in the same year he agreed to become temporary executive secretary of the State Medical Care Commission. Expecting to remain only a few months until a permanent secretary could be found, he held the position for ten years. During that period he directed the use of federal funds from the Hill-Burton Act for the construction of 127 hospitals and other medical facilities throughout North Carolina. In doing so, he established a pattern for the ideal use of such funds in hospital planning and health center construction.

During his distinguished career, Ferrell received many honors including the chairmanship of the National Malaria Commission (1924), the presidency of the American Public Health Commission (1933), and the chairmanship of the latter's executive board (1935–39). In 1940 he was awarded an LL.D. degree by his alma mater, The University of North Carolina. The university later gave him a distinguished alumnus award. Ferrell contributed numerous articles to public health journals.

On 28 Jan. 1909 he married Lucile Devereux Withers of Charlotte. They were the parents of a son, John A. Ferrell, Jr., of Kenansville, and a daughter, Bettie Devereux Ferrell. Ferrell was buried in Elmwood Cemetery, Charlotte.