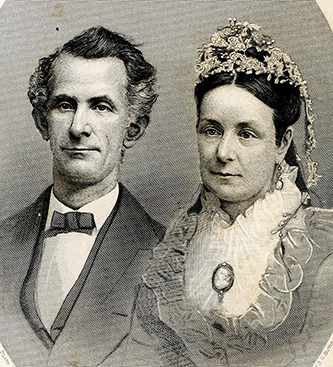 James Grant, III, judge, lawyer, and railroad builder, was born in Enfield, Halifax County, the second of eight children of James and Elizabeth Whitaker Grant. He entered The University of North Carolina in 1828 and was graduated in 1831. At the university he excelled in classical languages, a proficiency he maintained throughout his life. Subsequently Grant was principal and a teacher at Raleigh Academy for three years. At this time he also read law in the office of William H. Haywood, a Raleigh lawyer and U.S. senator from North Carolina in 1843–46.

Apparently motivated by a dislike of slavery, Grant left North Carolina in 1833 and established a practice in Chicago. He was always intense, and according to legend he had a fistfight over his first client. Soon afterwards Governor Joseph Duncan appointed him prosecuting attorney for Illinois' Sixth District, which included all of northern Illinois. The position required over 3,000 miles of horseback travel each year, and Grant resigned in 1836 to devote time to his legal work in Chicago. In 1838 he moved west to a farm outside what became Davenport, Iowa, where he practiced law for the rest of his life.

When Grant moved from Chicago to the Iowa Territory, he took his personal law library with him. It was the largest in the territory, and after continuous additions by Grant, became the largest private law library in the west. Now owned by the Scott County Bar Association, it was in 1964 the nucleus of the most complete law library in the state except for that at the University of Iowa and possibly Drake University. Grant, who provided a room for the Iowa Supreme Court when it sat in Davenport, permitted any judge or lawyer free access to its volumes, including those working up cases against him.

In 1841 Grant was elected to the Territorial House of Representatives, and in 1844 he was a delegate to the First Constitutional Convention. Against his protest, he was appointed Iowa prosecuting attorney in 1845. Two years later he was elected a judge of the District Court of Iowa for a five-year term but did not seek reelection. In 1851, he was also elected speaker of the Iowa House of Representatives. Although Grant was a lifelong Democrat and maintained an active interest in politics, this was his last elective office. For many years, however, he was an Iowa delegate to the Democratic presidential conventions.

Grant's greatest prominence came from railroad activities. He was the first president of the Chicago and Rock Island Railroad and, after his resignation in 1852, railroad law became his specialty. According to tradition, he had more cases before the United States Supreme Court than any lawyer up to his time; when he eventually lost one, he retired.

After the Civil War, Grant extended invitations to his and his wife's southern nephews and nieces to go to Davenport for an education; seventeen of them did so. No expense was spared, and several nephews were educated in Europe, later becoming successful in their own right. One nephew, William West Grant, who became a prominent surgeon, was the first to remove an appendix surgically; he also performed the first surgical transplant of a nerve. Another, James Grant, became the first Democratic governor of Colorado (1883–85); prominent in mining and smelting, he eventually was a founder of the American Smelting and Refining Company. The elder Grant financially backed one nephew, also named James Grant, who had studied mining and metallurgy. Their venture, a smelter in Leadville, Col., established in 1877, quickly became very successful. Grant then spent some months at the Massachusetts Institute of Technology to study the field further.

About 1880 he acquired a farm near Fresno, Calif., to use as a winter home. He died there and was buried in Davenport, Iowa.