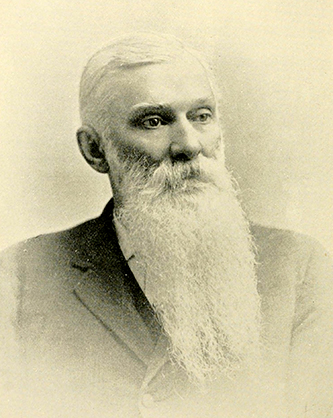 Julius Alexander Gray, banker and railroad president, was the son of Alexander (1768–1864) and Sarah Harper Gray. His paternal grandfather, Robert Gray, lived first in New Castle, N.J., later in Orange County, Va., (where Alexander was born), and finally in Randolph County, N.C. Robert Gray, who had a good education for that day, was a noted raconteur and social leader. He served in the North Carolina Senate in 1798–99, 1804–7, 1812, 1823–24, and 1826–29. In 1812, the state appointed Gray a general in the state militia, but he did not serve on active duty. Julius A. Gray's mother was the daughter of Jeduthan Harper, a resident of Randolph County, a colonel during the American Revolution, and a relative of Robert Goodloe Harper of Maryland.

Gray's early years were carefree; he never was exposed to systematic labor, and he enjoyed good health and a strong body. After attending Caldwell Institute near Greensboro, he studied with the Reverend Jesse Rankin in Lexington. He then entered Davidson College as a sophomore in 1850 and was graduated in 1853.

From 1855 to 1869 Gray served a business apprenticeship that adequately prepared him for more responsible positions. In 1855, he became teller and bookkeeper of the Greensboro branch of the Bank of Cape Fear. The president of the bank was Jesse H. Lindsay, Gray's brother-in-law and a brother of Mrs. John Motley Morehead. In 1858, Gray moved to Virginia where he was cashier of the Bank of Danville. In the fall of 1860 he resigned this position to improve his poor health by spending a winter in Florida. Upon his return to North Carolina in the spring of 1861, his father-in-law, John Motley Morehead, appointed him manager of his cotton mills at Leaksville. Later he received a post in the Confederate Treasury Department, where he served through the Civil War. For three years after the war, Gray was administrator of the estates of his father, his only brother Robert (a lieutenant colonel in the Second Regiment of North Carolina Troops), and two brothers-in-law, all of whom had died during the war. Gray's entrepreneurial experience was broadened in this period by helping in the business ventures of his father-in-law.

The second phase of Gray's business career, when he resumed banking and related enterprises, extended from 1869 to 1879. In 1869 he purchased the building used by the Bank of Cape Fear and, with Jesse H. Lindsay and Eugene Morehead, reorganized it into the Bank of Greensboro. Lindsay was president of the bank and Gray was cashier. In 1876 this bank was reorganized as the National Bank of Greensboro, and in 1887 Gray became president. Because of Gray's strong support of Zebulon Vance for governor in the election of 1876, Vance appointed him a director of the North Carolina Railroad. In this position Gray learned the fundamentals of railroading, which prepared him for his crowning achievement.

On 3 Apr. 1879 the board of directors of the newly chartered Cape Fear and Yadkin Valley Railroad Company elected Julius A. Gray president. A momentous task lay ahead of him. Originally chartered in 1852 as the Western Railroad, the CF & YVRR had only forty-two miles of track from Fayetteville toward the coal fields of Chatham and Moore counties, and it was heavily indebted. Moreover, the state of North Carolina had come into possession of 77 percent of the stock, and the railroad was involved in complicated litigation. Gray's first task was to purchase the state-owned stock and to settle the debt. He formed a company to buy the state-owned stock and borrowed money from New York banks and the state of North Carolina to make the company solvent. He then helped to charter the North State Improvement Company, of which he was vice-president and general manager, to complete the construction. By the time of his death in 1891, the company was operating in the black and had expanded its main line from Wilmington through Fayetteville and Greensboro as far as Mount Airy. Because of this remarkable achievement and Gray's other activities, Greensboro regarded him as the keystone of its prosperity.

In the 1880s Gray was also involved in ancillary business activities. In 1887, he helped to found the North Carolina Steel and Iron Company, which constructed blast furnaces in Greensboro in the hope of using native coal, iron ore, and limestone to make the city a steel center. The venture failed when the local iron ore proved to have too much titanium and was difficult to smelt. Gray was also president of the Greensboro Chamber of Commerce (1887), a director of the Central Land Company, and president of the Mount Airy Granite Company.

In addition to his business affairs, Gray found time for community activities. He was a town commissioner in 1870. In 1882, he helped found the Guilford Battle Ground Company to preserve the site of the Battle of Guilford Court House. When the Greensboro Female College was sold for debt, Gray helped organize a company to purchase the institution's property and equipment so that it might resume operation. On 4 Dec. 1881 he joined the First Presbyterian Church of Greensboro.

"Col Julius A. Gray, Greensboro, N.C." A memorial volume of the Guilford Battle Ground Company. Organized May 6, 1887, at Greensboro, N.C. It contains a brief history of the battle of Guilford Court House, an account of the organization and progress of the Guildford Battle Ground Company, biographical sketches, and a full account of the Holt monument and its dedication, July the 4th, 1893. Greensboro, N.C., Reece & Elam, printers. 1893. 117-120. https://archive.org/stream/memorialvolumeof00guil#page/n179/mode/2up (accessed March 22, 2013).

"Col Julius A. Gray, Late Vice-President of the G.B.G. Company." A memorial volume of the Guilford Battle Ground Company. Organized May 6, 1887, at Greensboro, N.C. It contains a brief history of the battle of Guilford Court House, an account of the organization and progress of the Guildford Battle Ground Company, biographical sketches, and a full account of the Holt monument and its dedication, July the 4th, 1893. Greensboro, N.C., Reece & Elam, printers. 1893. 116. https://archive.org/stream/memorialvolumeof00guil#page/n179/mode/2up (accessed March 22, 2013).