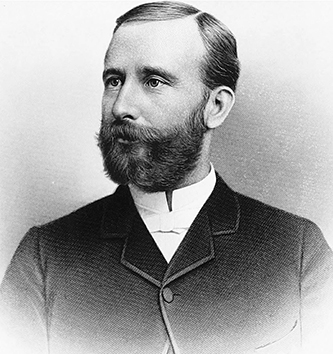 Eugene Lindsay Morehead, banker and industrialist, was born in Greensboro, the son of Governor John Motley and Ann Eliza Lindsay Morehead. He entered The University of North Carolina in 1861 at age sixteen and remained until 1863, when he enlisted in the Junior Reserves and was ordered to Smith Island at the mouth of the Cape Fear River to help provide for the defense of the port of Wilmington. Morehead was assigned to brigade headquarters with the rank of lieutenant. He saw action in defense of Fort Fisher late in 1864 and participated in the Battle of Bentonville in March 1865. At the end of the war he resumed his studies at the university and was graduated in 1868 near the head of his class.

Returning to Greensboro, Morehead was employed in a bank of which his uncle, Jesse Lindsay, was president. Until 1874 he worked in banking and engaged in the tobacco business with another relative. He lived in Savannah, Ga., from 1874 until 1879, probably in order to expand family business connections, although it is not clear exactly what he did. In 1879 he returned to North Carolina and settled in Durham, a thriving new center of business, where he became a banker and participated in various industrial undertakings. He served on the board of town commissioners and on the board of education, sometimes as president of the latter, when he saw the successful implementation of a system of graded schools.

In addition to his own Morehead Banking Company, which encouraged the industrial development of Durham, Morehead was active in the Faucett Durham Tobacco Company, the electric light and power company, the street railway, the Durham waterworks, the Durham Land and Security Company, the Durham Fertilizer Company, and the Fidelity Bank, among other firms. He also served the First Presbyterian Church of Durham as an elder and a teacher of the adult Bible class. In brief, he participated in almost every phase of Durham's business, civic, and educational life.

On 7 Jan. 1874 Morehead married Lucy Lathrop of Savannah, Ga. They were the parents of three children: Margaret Warren (Mrs. Rufus Lenoir Patterson), Eliza Lindsay (Mrs. John F. Wily), and Lathrop. After becoming ill in the fall of 1888, Morehead went to New Orleans for medical treatment. He died the following year at age forty-four and was buried in Maplewood Cemetery, Durham.