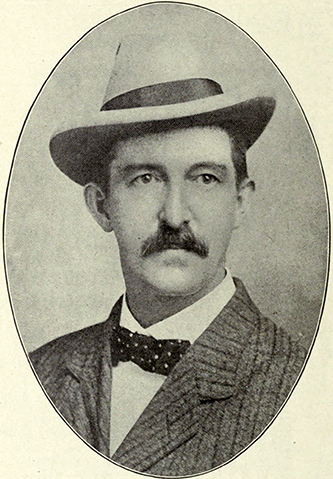 Wade Hampton Harris, newspaper editor, was a native of Sandy Ridge, Cabarrus County, the oldest of seven children born to Richard Sadler (4 Jan. 1835–6 July 1911) and Mary Annette Hampton Harris (1837–12 Jan. 1929). His maternal grandfather was Joseph Wade Hampton, proprietor of newspapers in Salisbury and Charlotte in the 1830s and 1840s. His father, a native of Rock Hill, S.C., served for a time as sheriff of Cabarrus County.

Harris was educated in a private school operated near his home by General James H. Lane and B. Frank Rogers. At age fifteen he began to learn the printing trade in the office of the Concord Sun, which was owned by his uncle, Charles F. Harris. In January 1875, Harris entered the Virginia Agricultural and Mechanical College (now Virginia Polytechnic Institute and State University) at Blacksburg. There he again came under the influence of General Lane, who was then head of the school's military department. While a student, Harris started a newspaper known as the Yellow Jacket ; it is said to have been the first college paper published in the South.

Returning to Concord, he joined the staff of the Concord Sun as local editor on 1 Feb. 1876. By mid-July of that year, at age eighteen, he had become the Sun's general editor and proprietor. In his first issue as editor, Harris declared that "The SUN is strictly Democratic and will leave nothing unsaid that will redound to the interest and welfare of our party." He maintained a lifelong devotion to the Democratic cause.

In October 1878 Harris sold the Concord Sun and moved to Wilmington, where he became city editor of the Wilmington Sun, a newly founded daily. He remained there until November 1879, when he moved to Greensboro to be local editor of the Greensboro Patriot. The following year he returned to Concord, repurchased the Sun, and was its editor and proprietor until May 1882, when he again disposed of the journal. He then moved to Charlotte to accept a position as local editor of the Daily Charlotte Observer (later the Daily Journal-Observer ). There, on 27 Feb. 1884, he married Cora Springs (7 Dec. 1860–16 Aug. 1937), daughter of John and Elizabeth Stafford Springs of Charlotte.

In 1896, at his own expense, Harris published Sketches of Charlotte, a booklet designed to publicize the attractions of the Charlotte area and the city's potential for commercial growth. This publication, reprinted at least eight times, enhanced Harris's reputation as a civic promoter. Between 1896 and 1924 he published several other booklets to make known Charlotte's commercial advantages.

Harris was named editor in chief of the prestigious Charlotte Observer on 10 June 1912. His selection was commended by the state's press corps. Several papers attributed Harris's appointment to his well-known loyalty to the Democratic party and particularly to his championship of the presidential candidacy of Woodrow Wilson. As a leading promoter of civic improvements in Charlotte, Harris began shaping the editorial columns of the Observer into a vehicle for his generally progressive views on broader state and regional issues. He reportedly exerted considerable influence upon public opinion in the areas of road improvement and the development of a tourist industry in North Carolina.

A recognized leader of the state Democratic party, Harris cooperated with Governor Charles B. Aycock's efforts to establish an educational revival in the state. Widely credited with helping to bring about the relection of Furnifold M. Simmons to the U.S. Senate in the celebrated Simmons-Kitchin-Clark campaign of 1912, he was also instrumental in the election of Cameron Morrison as governor in 1920. A staunch supporter of Woodrow Wilson, Harris served as an alternate delegate to the Democratic National Convention of 1916. That year he was a member of the North Carolina delegation sent to Shadow Lawn, N.J., to inform Wilson of his renomination for the presidency. Harris also attended the Democratic National conventions of 1920, 1924, and 1928.

In addition to his political activities, the newspaper editor was appointed to serve on various state and national boards and commissions. In 1921 Governor Cameron Morrison named him president and director of the North Carolina Railroad Company, a largely ceremonial post. During this time Harris was also a director of the Woodrow Wilson Foundation. He served in 1934 as a member of the State Advisory Board of the National Recovery Administration.

Harris toured Europe with a group of newspapermen in 1919, 1927, and 1932, and attended U.S. naval maneuvers in the Caribbean in 1924. An extensive world traveler, he nevertheless prided himself on his travels in, and vast knowledge of, the Carolinas. He was regarded as an expert on North Carolina's people, history, resources, institutions, and potential. His years of effort on behalf of a better North Carolina were recognized in 1926 when Davidson College awarded him an honorary doctor of laws degree. And his attempts to promote tourism in his beloved North Carolina mountains were cited when a newly constructed highway bridge in Wilkes County was named for him in August 1931. Spanning the 112-foot Lewis Fork Creek gorge, the structure was then the second highest bridge in the state. Harris was also the author or editor of several books and pamphlets, including My School Days: Reconstruction Experiences in the South (1914), The City of Charlotte and the County of Mecklenburg (1924), Letters to the Charlotte Observer (1927), and The Editor, Abroad (1934). He was a member of Kappa Sigma fraternity and the Charlotte Chamber of Commerce.

In January 1933 Harris, at age seventy-five and in failing health, relinquished a portion of his editorial duties to Julian Miller, a junior associate; he was then by far the state's oldest living newspaper editor. He died two years later and was buried in Elmwood Cemetery, Charlotte. A Presbyterian, he was survived by his wife, his son Richard Pegram Harris of Hendersonville, and his daughter Cora Annette Harris of Charlotte (d. 18 Jan. 1983), a newspaper columnist and horticulturist; another son, James Pinckney Harris, died 10 Mar. 1933. He was known as "Colonel" Harris, but the appellation was honorary.