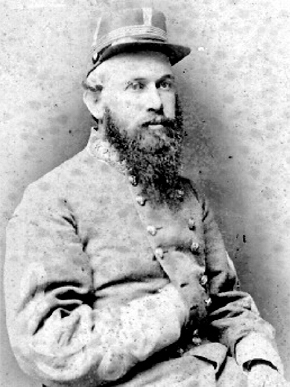 James Henry Lane, Confederate soldier, educator, and engineer, was born in Matthews Court House, Va., the son of Colonel Walter Gardner and Mary Ann Henry Barkwell Lane. His great-grandfather, Ezekiel Lane, an early settler in Matthews County, was active in political and military affairs. His grandfather, William Lane, was a sergeant in the War of 1812, and his father was a colonel in the Matthews County militia while serving as a member of the state legislature during the Civil War. James Henry Lane was trained by tutors on his father's plantation and in private schools until 1851, when he entered Virginia Military Institute at Lexington and became a student of Thomas Jonathan Jackson. He was graduated on 4 July 1854, second in his class, and then attended the University of Virginia where he received a degree in science in 1857. After serving as engineer on a hydrographic survey of York River, he became assistant professor of mathematics and instructor in tactics at Virginia Military Institute. His next appointment was as commandant and professor of mathematics at the State Seminary of Florida at Tallahassee. When the Civil War began, he was professor of natural philosophy and instructor in tactics at the North Carolina Military Institute in Charlotte under D. H. Hill.

At the governor's call for troops, Lane volunteered, along with the other officers of the school, and became adjutant and instructor in tactics at a camp of instruction organized near Raleigh. D. H. Hill was commandant. With the creation of the First North Carolina Volunteers, Lane was elected its major. Being of only average height, he was called the "Little Major"; even after he became a general, he was the "Little General." His regiment went into Virginia at once, and, on 10 June 1861, he led an attack on a marauding party which the North Carolinians drove back. This brought on the action at Bethel and gave Lane's force the title, "Bethel Regiment." When Hill was promoted Lane became a lieutenant colonel, and with the reorganization of the North Carolina Troops, he was elected colonel for the Twenty-eighth Regiment. This regiment saw constant action under General Lawrence O'Brian Branch. After Branch was killed at Sharpsburg, Lane was placed in command of the brigade and promoted to brigadier general on 1 Nov. 1862. At twenty-nine, he was the youngest brigadier in the Confederate army. The members of his unit proudly presented their "Little General" with a sword, sash, bridle,and saddle in honor of his promotion. Among the regiments that now came under his command was the "Bloody Eighteenth."

Lane was consistently placed in strategic positions. He covered the withdrawal from Sharpsburg just as he did later from Gettysburg. In the latter battle, his men were the last to leave the field although they had been fighting since 1 July. He lost 50 percent of his troops in the battle. When his brigade covered the break at the "Bloody Angle" at Spottsylvania, it turned the Union advantage into defeat. At Cold Harbor he received his third wound. Although it was considered to be mortal, he recovered and joined his troops before Appomattox. There he and his men surrendered. Lane was highly respected by both Generals Robert E. Lee and Thomas Jonathan Jackson. At Chancellorsville, after Jackson was fatally wounded, his last order was to Lane. Of Lane's brigade and its dauntless leader at Chancellorsville, Vice-President Hannibal Hamlin's brother, a colonel in the Union army, said: "the student who seeks to discover a higher degree of courage and hardihood among military organizations of either army will look over the records of war for a long time if not in vain."

When the war ended, Lane returned home to find his parents virtually destitute and in deep grief over the loss of two sons, both of whom served under their illustrious brother. He worked there for a while until he could borrow $150 to assist him in finding employment. Subsequently, he taught in private schools in Richmond, Va., and in Concord and Wilmington, N.C. In 1869 he married Charlotte Randolph Meade of Richmond, and they had four daughters. From 1872 to 1880, Lane was professor of natural philosophy and commandant at Virginia Agricultural and Mechanical College (later Virginia Polytechnic Institute). His next job was as superintendent of the Virginia Mining and Manufacturing Company. In 1881–82 Lane was back in teaching as professor of mathematics at the Missouri School of Mines and Metallurgy, and the following year he accepted a position as professor of civil engineering and commandant at the Alabama Agricultural and Mechanical College. Later he became professor of engineering and drawing at the same school, then called Alabama Polytechnic Institute (later Auburn University), where he taught for twenty-five years and became professor emeritus in June 1907. He died three months later and was buried at Auburn.

As a professor Lane was admired and respected just as he had been as a soldier. He received an honorary LL.D. degree from Trinity College (later Duke University) and a Ph.D. from the University of West Virginia in 1896. He was one of three guards of honor at the first interment of Jefferson Davis, who had said of him in 1886: "Endeared to me as he is by his service to the South, . . . I admit that I feel a warm interest in his success, not for himself alone, but also as a good example for the youth of the State I love so well." Lane was an Episcopalian.