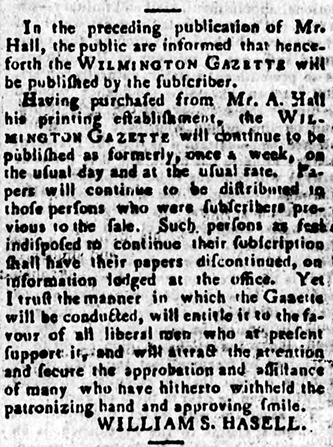 William Soranzo Hasell, newspaper editor and civic leader, was born in Charles Town, S.C. He was the great-grandson of James Hasell, chief justice and president of the Council in colonial North Carolina. His mother, Susanna Hasell, married Parker Quince, the son of Brunswick merchant Richard Quince. It is said that, because no descendants of James Hasell survived bearing the name, Susanna Hasell Quince asked her son, William Soranzo Quince, to take the Hasell name in order to perpetuate it. This plan was thwarted when William S. Hasell died in his thirties, childless.

Hasell was graduated from Yale in 1799 at age eighteen. He studied law but abandoned its practice to pursue his newspaper and literary interests. This included editing the Minerva, an organ of the Federalist party. In 1808 Hasell bought the Wilmington Gazette from Allmand Hall, and served as either editor, publisher, or both until his death. Among his other achievements was the establishment of a circulating library and reading room in Wilmington. According to the Gazette of 15 Nov. 1808, the reading room contained "all new and interesting pamphlets, and a variety of the best reviews." The subscription rate was ten dollars a year, or one dollar a month for "strangers."

In 1805 Hasell married Elizabeth G. Tart of Charleston, S.C. His early death cut short a life dedicated to the advancement of knowledge and the improvement of Wilmington. He was buried with the Quince family at Rose Hill Plantation, on the Northeast Cape Fear River in what is now Pender County.