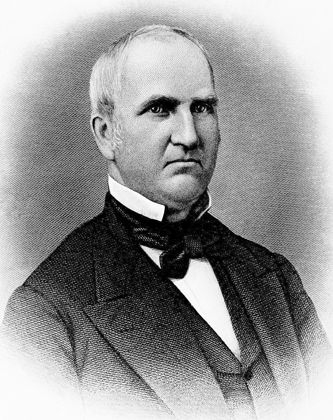 Cushing Biggs Hassell, businessman, politician, and educational official in Martin County, became the leading Primitive Baptist minister in the state during the mid-nineteenth century. His father, Joshua Hassell, suffered an unfortunate lot, never professing the religious faith his son considered so crucial in life, and leaving his family penniless on his death in 1824. Cushing's mother, Martha Biggs Hassell, was said to be a pious follower of the Primitive Baptist church. Her "resigned and cheerful" manner aided her ongoing battle with rheumatism, which she endured for thirty years prior to her death in 1860.

Born in Martin County, Hassell spent his childhood alternately with his parents in Williamston and with his grandparents on Albemarle Sound. From an early age he attended school irregularly until he was fifteen; when his father died, however, he went to work to support his mother and the rest of his family (apparently he was the oldest brother). Between various clerking jobs in Williamston, he also worked in Halifax and Plymouth. At age eighteen Hassell resolved to abstain from alcohol, tobacco, gaming, and profanity, and "to be strictly honest, truthful and upright" in all his endeavors. In 1828, during a period of religious excitement in Halifax, he was converted. Two months later Elder Joseph Biggs baptized him in Williamston, and he became a faithful member of the Skewarkey Primitive Baptist Church.

In June 1831, Hassell opened a store with Henry Williams of Williamston, in the partnership of Williams and Hassell. Hassell received only one-third of the profits, but acquired valuable business experience. Upon the dissolution of the enterprise in 1834, he went into business with William Williams, brother of Henry. According to Hassell, their effort floundered for three years owing to Williams's lazy habits, and their partnership dissolved in the wake of the economic panic of 1837. In 1831 and 1832, Hassell also had been instrumental in a survey of Williamston.

In addition to his business ventures, Hassell was chosen a deacon of the Skewarkey Church in 1833. Ordained in 1842, he became a pastor of both the Skewarkey and Spring Creek churches, although he commonly traveled to neighboring churches on two Sundays a month. From 1859 until his death, he served as moderator of the Kehukee Association; founded in Halifax County in 1765, it was the oldest Primitive Baptist association in America.

In May 1832 Hassell married Mary Davis, daughter of Durham and Elizabeth Davis. They were the parents of seven children, two of whom had died by the time of Mary's death in June 1846. Hassell entrusted the care of his remaining five children to her mother Elizabeth; after her death in October of that year, he returned to Williamston with his children. In 1849 he married Martha Maria Jewitt, formerly the wife of Elder Daniel E. Jewitt, founder of the Christian Doctrinal Advocate and Monitor; she bore him four more children.

During his lifetime, Hassell served his community and state in a number of capacities. He was president of the Roanoke Steam Navigation Company, and he held various positions related to education: trustee and member of the Board of Examiners for The University of North Carolina, trustee of the Williamston Academy, founder and secretary-treasurer of the Williamston Library Association, and agent of the Chairman of the Board of Superintendents for the common schools of Martin County. A Democrat, he served at different times as clerk, master in equity, and treasurer for Martin County, and as a delegate to the Constitutional State Convention of 1875. In his role as a Primitive Baptist minister, he published a number of works on his denomination, including a history of the Kehukee Association and the churches composing it, a statistical table of all old-school Baptist associations in America, and a history of the Primitive Baptist church "for 4,350 years, from the creation to A.D. 350"—a work completed after his death by his son, Sylvester.

Hassell remained active up to the time of his death in Williamston after an illness of forty-two days. Near the end of his life, he reportedly requested to be buried at Skewarkey, "by the side of my children."