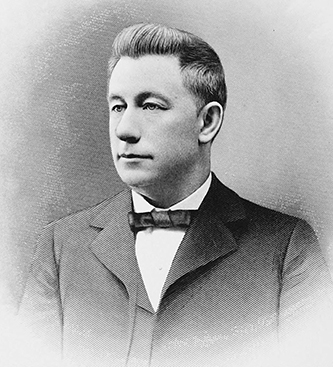 Jacob Franklin (Frank) Highsmith, surgeon, was born at Hives (now Roseboro), the son of John James and Mary Ann Fowler Highsmith. His father, a well-to-do farmer, supported the Confederacy and fought with the Sixty-first North Carolina Regiment throughout the Civil War; his mother was a descendant of the Parkers, Revolutionary patriots. Young Highsmith attended private schools near his home, Old Salem Academy in Sampson County, and Glenwood Academy in Johnston County. He was graduated from Wake Forest College in 1887 and from Jefferson Medical College, Philadelphia, in 1889, shortly before his twenty-first birthday. In the latter year he began a practice in Fayetteville, but his pursuit of learning was lifelong. He regularly visited the Mayo Clinic in Rochester, Minn., as well as other prestigious hospitals in the United States, and observed hospitals abroad in 1906, 1914, and 1928.

In 1896 Highsmith opened a brick office in the business section of Green Street. The building, which had rooms on the second floor to accommodate patients overnight, quickly assumed the name of Highsmith Hospital. In 1899, Highsmith and Dr. J. H. Marsh, who also had an office on Green Street, joined to establish a three-story hospital—known as the Marsh-Highsmith Hospital—in the same location, extending the building to Market Square. Two years later Highsmith bought out Marsh, enlarged the hospital, and improved the equipment. This hospital was said to be one of the most modern in the South in the early part of the twentieth century. It had operating, anesthetic, sterilizing, and X-ray rooms; a surgeons' washroom and nurses' dressing room; lavatories with porcelain tubs and basins; a kitchen, pantry, and laundry; an elevator, electric lights (and gas lights for emergencies), call bells, telephones, screened windows; a private ambulance service; and rules for patients and visitors similar to hospital rules in force seventy-five years later. There were set rates for ward rooms, private rooms, and special nurses.

Highsmith Hospital was one of the first in the state to establish a training school for nurses; to provide hospital beds; to keep charts, records, and case histories; and to use ultraviolet-ray machines. It also was among the first to have a physiotherapy department and a high-voltage deep X-ray machine. In 1926 the hospital became so crowded, and that part of the town so noisy, that Highsmith erected a larger and even more modern hospital in a quieter location. Then, as from the beginning, the hospital had an outstanding staff. Dr. W. T. Rainey, a leading diagnostician in North Carolina who had begun his career with Highsmith in 1913, remained with the hospital until his death. Highsmith Hospital was one of the first in North Carolina to use insulin in the treatment of diabetes, and Rainey was one of the state's first physicians to acquire the state license then required to administer insulin.

As a boy, Highsmith began to practice surgery on his father's farm to assist animals in distress; his first operation was on a sheep. As a physician, his first operation on a human was for a hernia. In the early days, he sometimes operated on the patients' kitchen tables. While still a young surgeon, he performed so many successful operations, including the removal of large tumors, that he soon became known as "the miracle man." 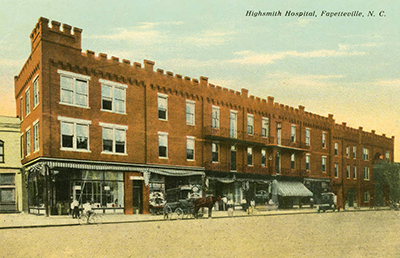 Highsmith was chief surgeon in his hospital until succeeded by his oldest son, Dacosta. His two other sons, Frank, Jr., and W. C., who became specialists, also joined the staff. In 1949, after Dacosta's death, the hospital was bought and run by a board of directors. In addition to his work at the hospital, Highsmith was surgeon for both the Atlantic Coast Line and the Norfolk and Southern railroads, was a consultant and visiting surgeon in many hospitals in North Carolina and elsewhere, and contributed articles to medical journals. Over the years he was active at various times in the Cumberland County Medical Society (president, 1903), North Carolina Medical Society (first councilor, 1902; president, 1909), the Jefferson Medical College Alumni (president, 1908), American College of Surgeons (life member from 1913), and the Tri-State (North Carolina, South Carolina, and Virginia) Medical Society (president, 1938). He organized the North Carolina Hospital Association and became its first president. Highsmith also was a delegate to the American Medical Society in 1907 and 1908, chairman of the Medical Advisory Board of the United States, and a member of the Mississippi Valley Medical Association.

A man of remarkable energy, he was deacon of the First Baptist Church; a member of the Sons of the Revolution and of the Fayetteville Chamber of Commerce; and a Mason, a Shriner, an Elk, and a Knight of Pythias. He was president of the local Rotary, which he helped organized, and of the National Bank.

At his death, Highsmith owned a home on Green Street, a large mountain cottage at Ridgecrest, and the 18,000-acre farm in Sampson County. After his parents' death, he had made the farm into a private recreation center with fishing, hunting, and bathing; it was open to all employees of the Highsmith Hospital.

Mary Lewis Wyche, The History of Nursing in North Carolina (1938).