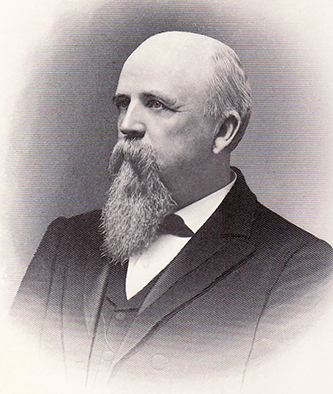 Franklin P Hobgood, teacher and college administrator, was born near Oxford, the eighth of twelve children of James Benton and Elizabeth House Hobgood. His father was a prominent agriculturist and leading citizen of Granville County. His paternal grandfather, Thomas Fowler Hobgood, is said to have emigrated from Wales in about 1770.

Young Hobgood prepared for college at the Horner Academy, Oxford, to which he rode daily on horseback from his home about six miles away. Following six months of service with Company B, Seventieth Regiment, North Carolina Junior Reserves Brigade, he entered Wake Forest College in January 1866, graduating as class valedictorian with a B.A. degree in 1868. He subsequently received M.A. (1871) and LL.D. (1918) degrees from his alma mater. After teaching for a few months at St. John's College, Oxford, Hobgood became principal of the Reidsville Classical and Mathematical School, Reidsville, in 1869. Thus began his long and distinguished career in education that would span the next fifty-five years.

In January 1871 Hobgood left the Reidsville school to join his father-in-law, William Royall, as co-principal of the Raleigh Female Seminary. When Royall moved to Louisburg in the summer of 1871, Hobgood became sole principal of the Raleigh seminary, continuing in that capacity until 1880. On 1 September of that year, Hobgood—joined by many faculty members whom he had attracted to the Raleigh school—opened a school at Oxford, occupying the premises formerly used by Mrs. M. A. Stradley in the operation of an academy for young women. Here he reestablished the Oxford Female Seminary (Oxford College after 1910), resuming an educational enterprise that had been inaugurated under the auspices of the Baptist denomination in that region in 1851. Except for a two-year period (1890–92) when ill-health forced his temporary retirement, he continued as president of the Oxford school until his death.

Hobgood's educational philosophy was expressed in an article entitled "The Education of a Girl—What It Is," which appeared in the Biblical Recorder of 19 June 1901. Developing his thought around the symmetry desired between the attainment of "power" (the capacity to accomplish a given end) and "poise" (a sense of proportion and good judgment), Hobgood argued that any difference between the education accorded men and women should be one of degree, rather than kind. He admitted that women might profitably concentrate more on the "spiritual" disciplines and men on the "material" ones, though he recognized that more concern in the curriculum for the spiritual, or aesthetic, could benefit the male populace as well. After discussing the role of the sciences, mathematics, languages, history, and aesthetics in the education of women, Hobgood summarized: "the design of colleges for girls should be to surround their pupils with such influences as to train their minds, cultivate taste, refine and polish manners, develop and strengthen the spiritual sense, and fit them to occupy with ease and grace every department of social and domestic life."

A Mason (Grand Master, 1915), a Democrat, and a Baptist, Hobgood was active in the educational, civic, and religious affairs of his community and state throughout his adult years. In addition to his responsibilities as a college administrator, he served on the boards of trustees of Wake Forest College (1879–1924), The University of North Carolina (1907–24), and the Baptist Orphanage at Thomasville (1897–1924). He was chairman of the Granville County Board of Education for six years and served one term as president of the Teachers' Assembly of North Carolina. Elected to four one-year terms as a vice-president of the Baptist State Convention of North Carolina (1887, 1905, 1906, 1910), he served on numerous boards and committees of the Convention for over a half century and was respected for his leadership and counsel among the churches of the Flat River Baptist Association.

Hobgood was interred in the family burial plot in Elmwood Cemetery, Oxford. Portraits are in the possession of various descendants, including Mrs. James H. Bost, of Charlotte, a great-granddaughter.