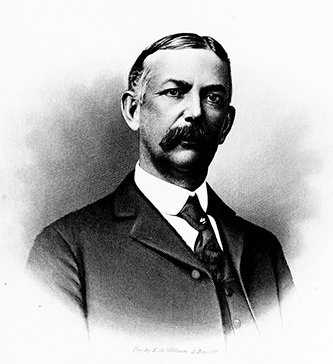 Walter Lawrence Holt, leader in the textile industry, was the son of James Henry and Laura Cameron Holt. His father was a well known manufacturer, his mother was the daughter of a prominent Caswell County farmer, and his grandfather, Edwin M. Holt, pioneered in the manufacturing of textiles such as the Alamance plaids in Alamance County. After preparatory training, young Holt took courses at Horner Military Academy in Oxford before entering Davidson College. Leaving Davidson in his junior year, he completed his formal education at Eastman's business College in Poughkeepsie, N.Y.

Holt began work as bookkeeper and shipping clerk at the Carolina Cotton Mills, which belonged to his father and uncle. Later he kept books and was a supervisor at another of the Holt mills at Glencoe on the Haw River in Alamance County. In partnership with his brother, Ernest, Holt built and became president of the Elmira Mills. In 1893 he opened the Lakeside Mills in partnership with Ernest and another brother, Samuel. Two years later he and his family moved to Fayetteville, where they built Holt-Morgan Mills in the suburbs. Holt was president and his cousin, Lawrence A. Williamson, was secretary-treasurer. Walter Holt also served as president and treasurer of the Fayetteville Lakeview Mills. In 1900, when the Tolar-Hart-Holt Mills began operation, he became a director of that firm.

Holt not only was concerned with building new mills but he also tried to provide for the needs of his employees. He was responsible for the construction of neatly laid out villages in the surrounding areas. The houses were supplied with water, and space was made available for gardening. Schools and churches were established, as well as recreation and amusement facilities.

Like most of his family, Holt was a Democrat, but he was less interested in politics than some members of the family.

On 12 Feb. 1890 Holt married Mary De Rosset, and they had four children: Elisabeth Nash, Walter L., Jr., William De Rosset, and Mary De Rosset. While still president of the Holt-Morgan and Holt-Williams mills in Fayetteville, and a director of several mills in the Alamance section of the state, Holt died in Westbrook Hospital in Richmond, Va. The funeral was held in St. John's Episcopal Church, Fayetteville, where he was buried.