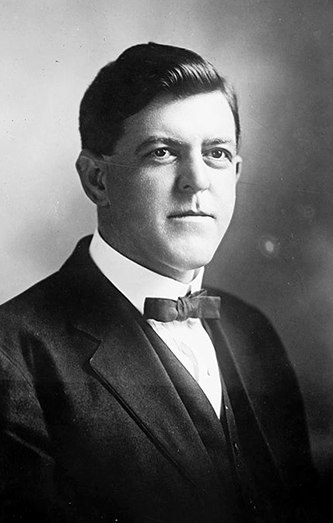 George Ezekiel Hood, lawyer, legislator, mayor, and congressman, was born in Goldsboro, the son of Edward Bass and Edith Finlayson Bridgers Hood. The Hood family had lived in the area since the eighteenth century. His mother was a member of a prominent eastern North Carolina family which was descended from Colonel Joseph Bridger of White Marsh in Isle of Wight County, Va. Bridger, a Burgess and a member of Sir William Berkeley's Council, played a leading Loyalist role in Bacon's Rebellion.

Hood's formal education began in 1880 when he entered the city schools of Goldsboro. After completing the seventh grade at William Street School, he dropped out and took a job as a messenger with Western Union; a few years later he became manager. He then worked for the Southern Railway Company in Goldsboro and Raleigh. Bright and enterprising, Hood returned to Goldsboro to study law, and was privately tutored by attorneys Isaac F. Dortch and Dail Hardy. In 1896, at age twenty-one, he was admitted to the bar of the North Carolina Supreme Court. He pursued the profession in Raleigh for a year before opening a practice in Goldsboro in 1897. An interest in politics led to his appointment as secretary of the Wayne County Democratic Executive Committee from 1896 to 1900.

Meanwhile, Hood enlisted in the National Guard in 1896 and was promoted to captain of Company B, First Regiment, on 19 July 1901, then to lieutenant colonel and assistant chief of ordnance on 20 Nov. 1905. He was transferred to the inspector general's department as assistant inspector general on 21 Jan. 1907 and retired as a colonel on 25 May 1909.

In the elections of 1898 Hood ran for county treasurer and a seat in the North Carolina House of Representatives on the Democratic ticket. He won both offices, serving as treasurer until 1901, when he was succeeded by James William Croom Thompson. In the house, Hood was appointed to the education committee that set in motion Governor Charles Brantley Aycock's educational reform program to upgrade public schools statewide. Later he was a member of the executive committee of the North Carolina Agriculture Department (1904–10).

Returning to Goldsboro in 1901, he was elected mayor and served with distinction until 1907. In that capacity Hood guided Goldsboro through its first real expansion, voting bonds to build the present city hall, pave streets, and take over public utilities.

In 1909 Hood sought a seat in Congress but lost the nomination by ten votes in a hectic, heated convention held in the Messenger Opera House in Goldsboro. In 1912 he was a presidential elector on the Democratic ticket of Woodrow Wilson and Thomas Riley Marshall. In the 1913 convention he was nominated by acclamation and in the general election led his party to victory over Republican B. H. Crumpler of Clinton; he was reelected to a second term in 1915.

During his four years in Congress, Hood actively supported President Wilson and was much interested in his military policy. He was on the congressional committee to receive the statue of Zebulon Baird Vance, former governor and U.S. senator from North Carolina, when it was placed in the capitol. Declining to seek a third term in 1918 for health reasons, Hood retired to Goldsboro where he again entered the civic and professional life of the county.

Always a student of history, Hood was a member (1903–8) of the State Literary and Historical Association and a charter member of the Wayne Historical Society. For many years he gave the annual address at ceremonies on Confederate Memorial Day, 10 May, in Goldsboro. In 1905 he published a philosophical work, The Origin of Man.

A lifelong member of St. Paul's Methodist Church, Hood served on the board of stewards and was frequently a delegate to the district and annual conferences. He was a Knight of Pythias and a Chancellor Commander and delegate to the Grand Lodge of North Carolina. Active in the Wayne County bar, he held every official position of that organization during his lifetime; at the time of his death, he was dean. From 1903 to 1956 he was also a member of the North Carolina Bar Association