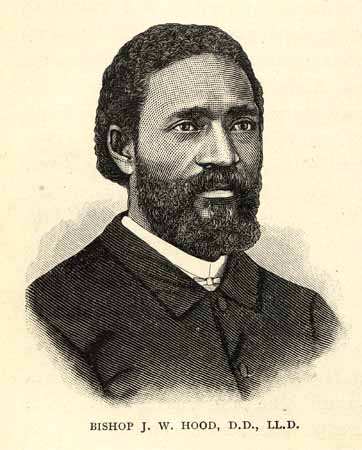 James Walker Hood, clergyman, educator, and bishop, the son of Levi and Harriet Walker Hood, was born on the farm of Ephraim Jackson in Chester County, Pa., nine miles from Wilmington, Del. His mother, a woman of "extraordinary intelligence," was much interested in all matters affecting blacks, including a separate church for her race. His father was a Methodist minister. While living in Wilmington, Hood's parents became involved in a controversy over by white Methodists; henceforth they supported the African Methodist Episcopal Zion church, established as the Methodist church for blacks.

Hood's childhood was a time of hard work, danger, and meager education. Levi Hood opposed binding any of his twelve children to an apprenticeship because he thought it similar to slavery. He did arrange verbal contracts whereby his children would work for food, clothing, and six weeks of school a year until they were sixteen. After young Hood had served a short term under a contract with Ephraim Jackson, the arrangement was ended, and he found work where he could in Philadelphia and New York. He was once kidnapped, apparently to be sold into slavery, but escaped. Although he attended school for only a few months in Pennsylvania and Delaware, his native ability enabled him to pursue general and theological studies without a teacher except for a tutor in Greek.

A religious inclination eventually led Hood into the ministry. At age eleven he experienced conversion, but questioned his beliefs until he was eighteen. At age twenty-one he mentioned to a minister his call to preach, thinking mistakenly that the clergyman would make arrangements for him. In 1856 Hood finally appeared before the New York Conference of the A.M.E. Zion church and secured a license to preach. The next year he moved to New Haven, Conn., and filled a pulpit there. In 1859 the New England Conference received him on trial and appointed him a missionary without pay to Nova Scotia. Lacking the funds to go, he worked in a New York hotel for thirteen months to become self-supporting. After being ordained deacon at Boston in September 1860, he departed for Nova Scotia. Hood landed at Halifax and walked the forty-five miles to Englewood, a mile from Bridgeton where he found a black community. Although its members were Hardshell Baptists and hostile to Methodism, Hood had gathered a congregation of eleven persons before his departure in 1863. In the interim he was ordained an elder in 1862 at Hartford. After serving in Bridgeport, Conn., for six months in late 1863, he was sent as a missionary to North Carolina where he remained for the rest of his life.

In North Carolina Hood found his major area of service. In early 1864, against the opposition of white Northern Methodists, he persuaded the black Southern Methodist congregations in New Bern and Beaufort to affiliate with the A.M.E. Zion church. When the Northern Methodists contested his conversion of these congregations to Zion, Hood was forced to appeal to the secretary of war for a ruling that permitted the blacks to align with whichever church they desired. In late 1864 he helped to found the North Carolina Conference, and over the years he aided in the establishment of numerous churches within its bounds. Hood was a pastor for three years in New Bern, two years in Fayetteville, and over three years in Charlotte. After becoming a bishop in 1872, he resided in Fayetteville until his death. 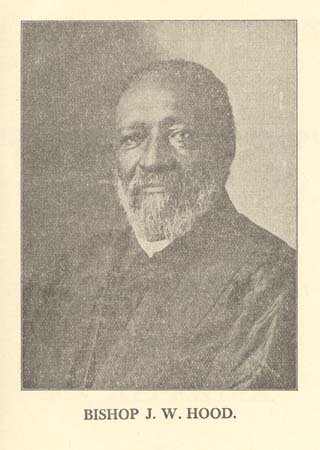 Hood became active in North Carolina politics on behalf of his people. In the fall of 1865 he presided over the first statewide political convention of blacks, which met to demand civil and political rights. In 1868 he participated in the state constitutional convention and contributed greatly to placing strong homestead and public school provisions in the constitution. From 1868 to 1871 Hood served as assistant state superintendent of public instruction, with the major duty of founding and supervising schools for blacks. Although hampered by white hostility and the lack of black teachers, he increased attendance to 49,000 students in 1871. Hood remained active in the Republican party, serving as a delegate to the national convention in 1872 and as temporary chairman of the state convention in 1876. He also served briefly as a magistrate and a deputy collector of customs and from 1868 to 1871, without pay, as assistant superintendent of the Freedman's Bureau in North Carolina.

Hood's duties as bishop took him to most states and to Europe. As an itinerant bishop, he had—by 1914—presided over several conferences annually for these total periods: New York, 27 years; New England, 24 years; Allegheny-Ohio, 6 years; Alabama, 4 years; Kentucky and New Jersey, 4 years each; California, 3 years; Philadelphia and Baltimore, 3 years; and Tennessee, 1 year. Yet most of his time he spent in the Virginia, North Carolina, South Carolina, and Georgia conferences which he had helped to found before becoming a bishop.

One of Hood's contributions as bishop was to help establish and guide Zion Wesley Institute (later Livingstone College) in Salisbury, N.C. He presided over its board of trustees for over thirty years, educated six of his children there, and donated a good portion of his annual salary to keep it open. In 1881 Hood attended an ecumenical conference in London to help secure finances for the institute. He appointed a committee of Englishmen to direct the fund-raising, had the name of the college changed to Livingstone in honor of David Livingstone who had recently died, and provided the means for the president of Livingstone to travel in England to assist in fund-raising.

Hood's family life, although disrupted by long absences from home, centered around three marriages. In 1853 he married Hannah L. Ralph of Lancaster, Pa., who died in 1855. In 1858 he married Sophia J. Nugent of Washington, D.C., who before her death bore him seven children, four of whom survived. On 6 June 1877, he married a twenty-seven-year-old widow from Wilmington, N.C., Keziah P. McCoy, who bore him two children. Keziah Hood was a freeborn seamstress and an Episcopalian, educated in Episcopal sabbath schools and at St. Frances Academy in Baltimore.

Hood was a large man of courage, conviction, and persistence. Two of his special interests were temperance and the rights of blacks in public transportation. From 1848 to 1863 conductors of the Pennsylvania Railroad tried on numerous occasions to remove him from first-class cars, but they never succeeded. In 1857 he was put off of streetcars in New York City five times in one night, but he was not deterred. In North Carolina Hood was so insistent in demanding first-class steamer accommodations that he was never bothered after the first contest. He avoided public transportation in the Deep South because asserting his rights absorbed so much energy. Regarding his second interest, Hood participated in every temperance campaign in North Carolina.