Hooper is noteworthy chiefly for his early contributions to the writing of North Carolina history and as a literary stimulus to his sons, John De B. and Johnson J. According to his friend Griffith J. McRee, Hooper—through guilelessness, impracticality, generosity, over-indulgence to his slaves, and "a fondness for polite letters"—failed as a lawyer in his youth and lost the valuable plantation inherited from his father in middle age. He also apparently had little success as solicitor and cashier of the Wilmington branch of the State Bank of North Carolina, offices that he held briefly. 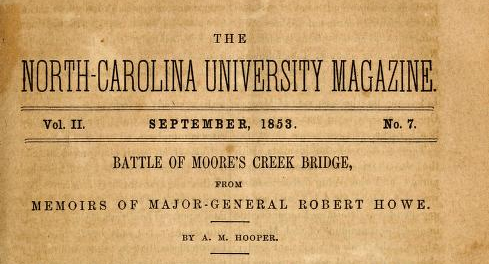 From 1826 to 1832 Hooper edited the Wilmington Cape Fear Recorder, which he filled with literate commentary and with some of the earliest biographical accounts of many of the Revolutionary figures of North Carolina. His best-known sketch is that of William Hooper, signer of the Declaration of Independence, written in 1822 and often reprinted, most notably in John H. Wheeler's Historical Sketches of North Carolina. His memoir of General John Ashe, completed by McRee, appeared as a pamphlet at Wilmington in 1854, and his sketch of General Robert Howe was published in the second volume of the U.N.C. Magazine (June 1853). At least eight other sketches remain buried in contemporary newspapers.

The Cape Fear Recorder burned shortly after it was offered for sale in 1832. Thereafter, Hooper held a position in the U.S. Customs Office at Wilmington for several years, one of numerous Federalists who united with "Jacksonian Democracy." On being removed from office, he published, under the pseudonym "Caius Victor," A Defence of Andrew Jackson Against the Calumnies of the Whig Press in Relation to the Removal of the Wilmington Collector (Wilmington, ca. 1845). This 83-page pamphlet is interesting today for its biographies of the successive port collectors of Wilmington.

In 1806 Hooper married Charlotte De Berniere, the daughter of a British Army officer. They had six children. His last years were spent at the home of his oldest son, George, in Russell County, Ala., where he died. Hooper was a member of St. James Episcopal Church, Wilmington.

Ridiculously sentimental, unsupported and xtra questionable. If this is truth he is one of the greatest buffoons known to a very weak sector of the Hoopers in America.