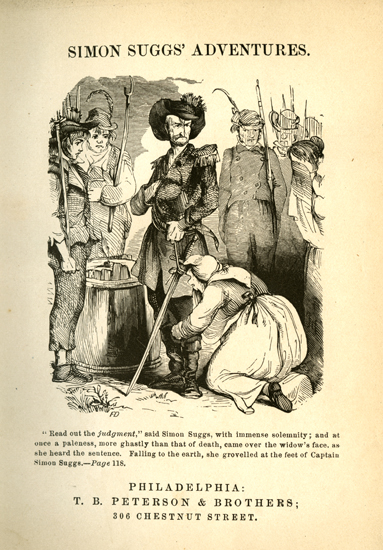 Johnson Jones Hooper, lawyer, newspaper editor, and short story writer, was born in Wilmington, the sixth and youngest child of Archibald Maclaine and Charlotte De Berniere Hooper. His forebears from both families were educated, cultivated citizens. William Hooper, his great-grandfather, was a graduate of Edinburgh University who left Scotland to settle in the colonies; he became pastor of Boston's West Congregational Church and, later, rector of Trinity Church. Another William Hooper, a signer of the Declaration of Independence, was his great-uncle. On his mother's side, he was descended from the Huguenot hero, Jean Antoine De Berniere.

Archibald Hooper, honorable and brilliant as he was, failed at every undertaking—planting, law, banking, and journalism—a fact that probably accounts for Johnson's failure to follow his brothers to college. George, the oldest son, attended West Point but withdrew to read law; Maclaine died in childhood; and John, the third son, became a professor of classics at The University of North Carolina. Johnson attended public school in Wilmington, read widely and voraciously, and was taught by his father. As a young lad he became a printer's devil in the office of the Cape Fear Recorder, edited by the elder Hooper. At age fifteen he published in the Recorder his first known work, a humorous poem entitled "Anthony Milan's Launch," about a British consul who fell into Wilmington harbor during a launching ceremony.

In 1835 Hooper followed his brother, George, to Lafayette, Ala., where he began to read law in the brother's office. The Dictionary of American Biography suggests that young Hooper left home because of a family disagreement, but other sources offer the more likely reason that his father's finances were depleted. Whatever the cause, the parents themselves later moved to Alabama and were warmly received by their sons. In 1838 Johnson was admitted to the bar and became active in Whig politics, and in 1842 he entered into a brief partnership with his brother. In 1843 Hooper became editor of Lafayette's first newspaper, the East Alabamian, and began writing Whig editorials; he also began to write the short stories that would make him famous.

From Hooper's experience as a census taker in 1840 came the story, "Taking the Census in Alabama," which appeared in the East Alabamian in the summer of 1843. William T. Porter, editor of the highly popular New York magazine, Spirit of the Times, happened to read the story, thought it first-rate, and reprinted it in his weekly. Numerous small newspapers scattered over the country printed and reprinted it, resulting in almost overnight fame for Hooper on a national scale. This also marked the beginning of a close friendship with Porter that lasted until the editor's death in 1858.

By the fall of 1843 Porter had printed another of Hooper's stories, "A Three Days Hunt in Alabama"—one that had been published in the East Alabamian under the title, "Our Hunt Last Week." Then, for slightly more than a year, no stories appeared; during this period Hooper was busy practicing law, editing his newspaper, and dabbling in politics, but his creative mind was active. In December 1844 he introduced "the remarkable Captain Simon Suggs of the Tallapoosa Volunteers, a shrewd, brazen, farcical backwoodsman whose whole ethical system was snugly summed up in his favorite frontier aphorism, 'It is good to be shifty in a new country.'"

The stories featuring the ready-witted captain, published first in the East Alabamian, found immediate favor. When copies reached Porter's desk he was overjoyed; within a few weeks, he reprinted three of the adventures (or misadventures) of Simon Suggs in the Spirit. In fact, Porter was so impressed that he delayed the printing of Big Bear of Arkansas, a volume of humorous short stories that he was editing, long enough to include one of Hooper's yarns. With the appearance of Porter's anthology, the publishers Cary and Hart almost immediately signed Hooper to a contract that led to the publication in the fall of 1845 of Some Adventures of Simon Suggs, Late Captain of the Tallapoosa Volunteers. The first printing of 3,000 copies was soon followed by 5,000 additional copies; by 1851 and 1852 the ninth and tenth editions had appeared and in 1856, the eleventh. The thirteenth edition, with an introduction by Manly Wade Wellman, was published by The University of North Carolina Press in 1969.

Within a few years Hooper had acquired a reputation, national and international, as a master of humor and satire. He, along with Augustus Baldwin Long-street, whose Georgia Scenes had appeared in 1835, provided for the South a special kind of storytelling. With genuine talent they developed the art of putting into written form the tales they had heard—tales that were anecdotal and realistic, and told with directness and gusto. None surpassed Hooper and Baldwin Long-street, but they were joined by Thomas Bangs Thorpe, William Tappan Thompson, Joseph Glover Baldwin, and George W. Harris in creating what Edgar Allan Poe referred to as a "species of writing." With perhaps two exceptions, each of these men was at one time or another associated with a newspaper, but none could be called a professional; their backgrounds varied widely and writing occupied a secondary role, yet the influence of these men has been considerable. Novelists and short story writers from the late nineteenth century to the present are indebted to them. Mark Twain was definitely influenced by Hooper, and, as Wellman suggests in his excellent introduction, William Faulkner's Snopses are near cousins of Simon Suggs.

In December 1842 Hooper married Mary Mildred Brantley, the daughter of Green D. Brantley, a well-to-do merchant and planter of Lafayette; three children were born to the couple—William De Berniere, Annie Brantley who died in early childhood, and Adolphus. The marriage was a happy one, and Hooper became a fast friend and political supporter of his father-in-law, who, like himself, was a member of the Whig party.

With the collapse of the Whigs and the approach of war, Hooper supported the Know-Nothing or American party, and then turned to the Democratic party where he took a firm stand for Southern rights. In his new political affiliation he was an admirer of William Lowndes Yancey, and, like Yancey, an advocate of immediate secession. In 1861 Hooper was living in Montgomery, where he was owner and editor of the Montgomery Mail; when the Provisional Congress of the Confederate States of America was convened in that city, he was elected its permanent secretary by acclamation. He soon sold his interest in the Mail, and in May 1861, with his wife and younger son, moved to Richmond, Va., with the new government. In 1862, as a result of governmental reorganization, Hooper lost his position as secretary of the Congress, but through the influence of Howell Cobb was appointed editor of the proceedings of the Provisional Congress and the constitution of the Confederate States of America.

As Richmond began to feel the effects of war, Mrs. Hooper and Adolphus returned to Montgomery, and Hooper, who had been an Episcopalian but never an ardent churchman, joined the Roman Catholic church. The war, overwork, and illness soon took their toll. He died, probably of tuberculosis, and was buried in Richmond's Shockhoe Hill Cemetery. For almost a century his grave went unmarked, and then, late in 1950, eleven men, "all ardent admirers of one of America's greatest humorists," contributed the funds to erect a suitable monument. A portrait of Hooper hangs in the Alabama Department of Archives and History in Montgomery.

Louis D. Rubin, Jr., A Bibliographical Guide to the Study of Southern Literature (1969).

Hooper, Johnson Jones. 1881. Some adventures of Capt. Simon Suggs late of the Tallapoosa Volunteers; together with "Taking the census," and other Alabama sketches. Philadelphia: T. B. Peterson & Brothers.