Abby House, Confederate "angel of mercy," was the daughter of Green and Ann House of Granville and Franklin counties. It is unclear where Abby was born, but she spent most of 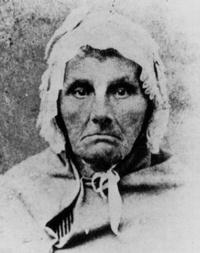 her adult life near Franklinton. Although her given name probably was Abigail, she came to be known as "Aunt Abby," and is most remembered for her aid to Confederate soldiers during the Civil War.

When the war began, she pledged to her eight nephews that she would do what was necessary to help them if they became sick or wounded. In fulfilling her promise she made frequent trips to Virginia on foot and by train. Although she rarely had enough money for train fare, her rough features, shrewd eyes, black mourning clothes, feisty personality, and ever-present cane convinced conductors of the expedience of allowing her to travel at no cost. She often neglected her personal safety to nurse or obtain furloughs for her nephews and other soldiers. Aunt Abby labored under fire during the bombardment of Petersburg and was present during or after other battles. Well endowed with self-confidence, she never hesitated to make demands of Robert E. Lee, Jefferson Davis, or Zebulon Baird Vance. By the end of the war all three men knew her personally. Because of her persistence in trying to obtain a furlough for one of her nephews, Marcellus, Vance once referred to Aunt Abby as the "ubiquitous, indefatigable and inevitable Mrs. House." When unable to travel, she gathered food and clothing for soldiers from her neighbors near Franklinton.

Aunt Abby's conspicuousness did not end with the Civil War. She admired Zebulon Vance as much as she loathed William Woods Holden. According to tradition, she was present during the Democratic convention held in Raleigh's Tucker Hall in 1876. Because Clay County was not represented, Paul Cameron moved that Aunt Abby be allowed to cast a vote during the balloting for the gubernatorial nominee. Her vote for Vance was perhaps the first instance of woman suffrage in the state. The following year she attended Vance's inauguration. Cartoonist Willis Holt Furgurson included Aunt Abby in "The Burial of Radicalism in North Carolina, Nov. 7, 1876," a cartoon representing Vance's victory over Judge Thomas Settle in the gubernatorial contest. In it she watches Vance tear asunder the state's shackles and exclaims, "ZEB your setting CAROLINA frae makes me feel like a gal again."

Aunt Abby mellowed in her final years. About 1876, the Reverend William Capers Norman of Raleigh converted her to Christianity and she joined the Methodist church. In March of that year she sat on the stage of the Metropolitan Hall in Raleigh with three bishops of the Methodist church during the celebration of the centennial of Methodism in North Carolina. During the conference she pledged $5,000 towards the construction of a proposed "Methodist Metropolitan Church" for Raleigh. She spent her last years in a cottage built near the old fairgrounds in Raleigh with funds provided by Confederate veterans. Governor Vance was among her regular visitors. She died at about age eighty-five and was buried in what is now an abandoned family cemetery north of Franklinton.

"The Legend of 'Aunt Abby, the Irrepressible'."  Published in The Franklin Times, April 17, 2014. The Tar River Center for History and Culture, Louisburg College. http://www.louisburg.edu/tarrivercenter/house.html (accessed February 17,  2014).