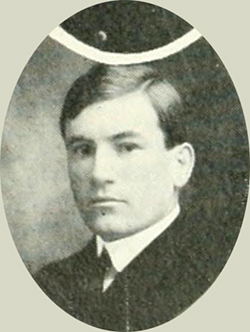 William Picard Jacocks, international public health physician and administrator, was born in Windsor. (His middle name, Picard, is accented on the last syllable.) His ancestors had lived in northeastern North Carolina as early as 1688. His mother was the former Emily Baker Nicholls. His father, Jonathan Joseph Jacocks, a Confederate veteran and staunch Episcopalian, was a merchant specializing in hardware and harnesses. Both mother and father died in August 1892, leaving eight children between the ages of three and twenty. William lived with his oldest brother, Charles, continuing his schooling at Windsor and at Trinity School, Chocowinity, in Beaufort County. He entered The University of North Carolina in 1898, but being short of funds withdrew after a year to teach for the next two winters at Chocowinity. He was graduated from the university with the class of 1904, a Phi Beta Kappa student and distinguished athlete, especially in football and track. Jacocks received a master's degree in 1905 after a year of graduate work in history, French, and pedagogy, serving at the same time as a graduate assistant teacher in French. For the next two years he taught at the Bingham School in Asheville and then returned to Chapel Hill to pursue the two-year medical curriculum. In 1911 he earned a doctoral degree in medicine from the University of Pennsylvania and the following year was an intern at Alleghany General Hospital in Pittsburgh.

In 1912 Jacocks joined the North Carolina State Board of Health to participate in a campaign—sponsored by the Rockefeller Foundation—to eradicate hookworm, working first in the field and later as state campaign director in Raleigh. His association with the Rockefeller Foundation lasted for thirty years. He left North Carolina in 1915 to continue the battle against hookworm in the British West Indies, first in St. Vincent and later in Trinidad where he served as acting director for the region. In 1917 he went to Ceylon, as director, to establish local health units, working out of Colombo. In 1927 he was also made director for India to operate the same type of programs in rural centers. Moving his base over to southern India about 1934 and to Delhi a few years later, he continued his work with hookworm and also with such problems as malaria, cholera, plague, smallpox, maternal and infant care, and sanitation.

His long service in Ceylon and India with the Rockefeller International Health Division was punctuated by scheduled periods of service in the United States, where he did related work and study. In 1918–19, commissioned as a captain, he completed Medical Officers Training at Fort Oglethorpe, Ga., and army bacteriology laboratory courses at Louisville, Ky., and New Haven, Conn. After being mustered out in January 1919, he had six months of study leave in New York and Baltimore before returning to Ceylon. While again in New York and Baltimore, Jacocks completed a doctorate at the Johns Hopkins School of Hygiene and Public Health in 1925. In 1931 he worked in the vicinity of Elizabeth City, N.C., and he made an observation tour for the International Health Division in Eastern Europe in 1936. During his years with the division, he was the author of numerous professional papers, mainly on hookworm and on the rural delivery of public health services. In 1927 he was elected a member of the (British) Royal Society of Tropical Medicine and Hygiene.

In Delhi as regional director of India and Ceylon, Jacocks arrived at retirement age in 1942. His longtime colleague, Dr. John A. Ferrell, wrote of him at that time: "His relationships with governmental authorities, with the people served, with his assistants, and with officers of the Division and the Foundation have been effective and harmonious and were always conducted on a high plane calculated to inspire confidence and cooperation. The projects he formulated were outstanding. . . . He has brought to large populations improved health and higher standards of living."

In vigorous health Jacocks came home to a nation at war, and from among the many opportunities open to him, he chose to pitch in at once with the North Carolina State Board of Health. For three years he was coordinator of school-health services, and for three more years he served as director of the division of nutrition in Raleigh.

In 1948 he "retired" again, settling soon afterwards in Chapel Hill where he lived at the Carolina Inn. The University of North Carolina awarded him the honorary degree of doctor of laws in 1954. Physically fit and mentally alert through the years in Chapel Hill, he was an ardent and regular spectator at athletic events and daily practice sessions of the university teams, each sport in its season. Jacocks was also a familiar figure at the university library, where he pursued his methodical research and purposeful reading. He concentrated especially on the history of his native Bertie County and a compilation of the Jacocks family genealogy, both interests of his father and his brother Charles before him. He was an active member of the Bertie County Historical Association and the North Carolina Society of County and Local Historians.

Off and on for years, Jacocks had been a collector of books, fine prints, paintings, eastern rugs, and objects of art in ivory, brass, jade, and tortoise shell. Two unusual collections that he accumulated were statuettes of Ganehsa, the Hindu god of wisdom and prudence, in as many different materials as possible; and pressed or clear glass celery vases. The latter hobby had its genesis after he returned from India and while he was working for the State Board of Health. Jacocks had set out one day to find something suitable to hold the cut flowers offered by flower sellers in downtown Raleigh, found a celery vase in a nearby store, subsequently found some more for friends, and ended up owning more than 300 matched pairs and about 150 different singles.

His temperament combined an appetite for hours of quiet work and study, with a balancing capacity for enjoyment of group activities, in which he was always a welcome and adaptable companion. The young athlete became the trim and agile octogenarian with a brisk gait. His voice was well modulated, his manners gracious and gentle; his face tended to light up easily and frequently with enjoyment and humor. Modest and considerate, he was an unassuming yet friendly person. Respect and sympathy for others were basic to his nature.

Jacocks never married. He died in Windsor and was buried at St. Thomas Episcopal Church cemetery there. Either during his lifetime or by bequest, he gave most of his books and other fine collections to his alma mater at Chapel Hill and to the Bertie County Historical Society and Public Library at Windsor.