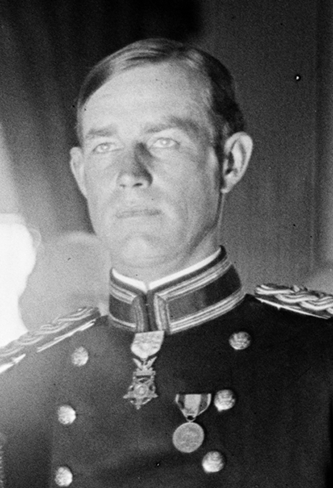 Gordon Johnston, military hero, was born in Charlotte, the son of Robert D. and Eliza Evans Johnston. The family had strong military traditions. His father was the youngest brigadier general in the Confederate Army, and his mother was the daughter of Colonel Peter Evans, who died of wounds received in a cavalry charge in the Battle of Upperville (1863). Mrs. Johnston, a great admirer of the noted contemporary British soldier, Charles George ("Chinese") Gordon, named her oldest son for him.

Johnston attended public school in Charlotte and the Pantops Academy in Virginia; he was graduated from Princeton with the B.A. degree in 1896. When the Spanish-American War broke out two years later, he enlisted as a sergeant in the Second Mississippi Infantry and soon afterwards became a private in the First U.S. Cavalry, the famous "Rough Riders." For a time he served as a mounted orderly to Colonel Theodore Roosevelt, forming a friendship that lasted until the latter's death in 1919. When the regiment went to Cuba, Johnston was left behind in Tampa to take charge of the horses and so missed action in the war. After the war he reenlisted, was assigned to the Forty-third U.S. Infantry, and in that command was promoted in 1899 to the rank of second lieutenant. Within a short time the division was sent to quell an insurrection in the Philippines. While commanding a small detachment of scouts, Johnston won his first distinction for gallantry in action after charging a superior force of insurgents to capture the town of Palo on 1 Feb. 1900.

Remaining in the army, he was detailed to the Signal Corps in 1904 and again assigned to the Philippines. In the spring of 1906, with an outbreak in the Maro country, Johnston volunteered for service with the troops sent there. At the engagement at Lake Lanao he led his men up the supposedly impregnable side of a crater, an action that figured largely in the resulting American victory. In the heat of battle Johnston was seriously wounded by a bullet through the shoulder and returned to the United States to recuperate. When the Mexican border situation led to mobilization of the National Guard units in 1916, Johnston was assigned to command the Twelfth New York Infantry. He attracted nationwide attention at the time by resigning his commission because he felt the mayor of New York had insulted his regiment by asking it to pass in review a second time. The affair was smoothed over and Johnston was restored to his command.

During World War I, he served as chief of staff of the Eighty-second Division in France and held other important commands. In his most noted exploit of the conflict, Johnston was credited with rescuing Major Whittlesey's "lost Battalion." After the war he returned to the scene of his former service and went to the Philippines with the Wood-Forbes Commission. As assistant to Leonard Wood, governor general of the Philippines, from 1921 to 1924, Johnston was delegated to organize a Guardian Society to care for Philippine orphans fathered by American servicemen. His success in this humanitarian cause won him high praise in Dr. Heiser's book, An American Doctor's Odyssey. In later years Johnston served in various commands in the United States. In 1928 he assisted General Frank R. McCoy in the elections in Nicaragua, and from 1929—when he was promoted to colonel—to 1931 he was military attaché to the American Embassy in Mexico. At the time of his death he was chief of staff of the Second Division at Fort Sam Houston, Tex.

Johnston was often referred to as the most decorated man in the U.S. Army, winning all the medals that the nation was authorized to confer and many awards from foreign governments. France made him a member of the Legion of Honor, and Japan awarded him the Third Class of the Imperial Order of Meiji. An outstanding horseman, he was an honor graduate of the infantry and cavalry schools in 1903 and attended the Royal Military Riding Academy in Hanover, Germany, in 1907. He was a member of the U.S. Army Officers Team in the International Horse Show in London in 1911. Johnston died of injuries suffered when he was thrown from his mount during a polo game at Fort Sam Houston. He was buried in Arlington National Cemetery.

Charles Kinsolving, president of the American Veterans Association which Johnston helped found, said of him: "He was one of the outstanding officers of American military life. He epitomized to me all that the American soldier should be. His sense of honor and justice and his devotion to his country was of the highest quality." Johnston was honored posthumously in 1943 when the name of Camp Carrabelle, Fla., was changed to Gordon Johnston. The camp was an important training center for invasion and commando tactics during World War II.

In 1904 Johnston married Anna Julia Johnson, the daughter of Dr. Robert Johnson of Baltimore. They had no children. In 1945 Mrs. Johnston endowed a carrel in his memory for the new library being planned at his alma mater, Princeton University, and donated his medals to be displayed in the library.