Thomas Laurens Jones, lawyer, legislator, and congressman, was born on his father's estate, White Oak, in Rutherford County. He was the son of George Jones, a planter of Welsh-English descent and a native of Orange County, Va. His mother, Elizabeth Mills Jones, also of English ancestry, was the daughter of Colonel William Mills. Jones received his preparatory education in Spartanburg, S.C., and attended Columbia College in Columbia, entering as a sophomore on 19 Dec. 1838. Subsequently, he was graduated in the class of 1840 at Princeton College, which awarded him an honorary degree in 1848. He received an LL.B. degree from the Harvard 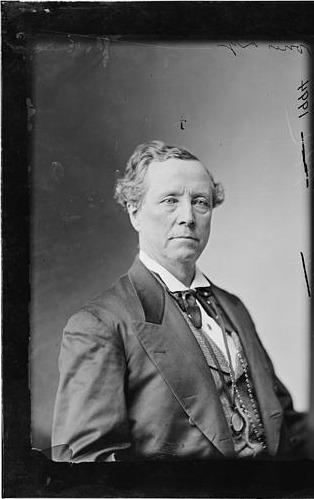 After leaving Harvard, Jones journeyed cross-country to New Orleans, visiting along the way with General Andrew Jackson and Henry Clay of Kentucky. Continuing his travels in Europe, he was for a time the guest of Washington Irving, then U.S. minister to Spain. Jones read law with James L. Pettigrue of Charleston, S.C., and was admitted to the bar in Columbia in 1846. The following year he moved to New York City where he practiced law until 1848. On 12 Sept. 1848 he married Mary K. Taylor, the daughter of Colonel James Taylor of Newport, Ky. Their children were James Taylor, Thomas, Laurens, and Elizabeth Mills (Mrs. Brent Arnold) of Cincinnati, Ohio.

In addition to his legal career, Jones became active in politics, serving from 1853 to 1855 in the Kentucky House of Representatives as a Democrat from Campbell County. He was elected to the U.S. House of Representatives for the Fortieth and Forty-first Congresses (4 Mar. 1867–3 Mar. 1871). Although not a candidate in 1870, he was again elected to the House for the Forty-fourth Congress (4 Mar. 1875–3 Mar. 1877).

Before the Civil War, Jones opposed secession; however, he is said to have opposed coercion as well. He was arrested in the summer of 1862 for "disloyalty" and sent to Camp Chase in Columbus, Ohio, as a political prisoner. After refusing to take the oath of allegiance to secure his release, he was paroled to Newport with the recommendation that the parole not be renewed.

Jones is credited with being the first member of Congress to favor a general amnesty in the postwar period. After his final term, he practiced law in Newport, Ky., until his death. A member of the Episcopal church, he was buried in Evergreen Cemetery, Newport.