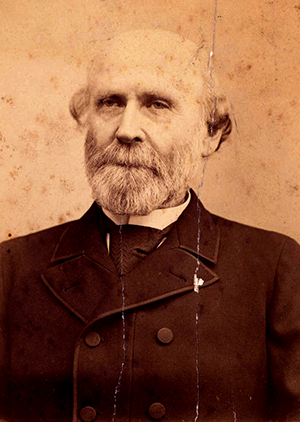 Theodore Bryant Kingsbury, clergyman, author, literary critic, and journalist, was born in the Guion Hotel at Raleigh, the son of Russell and Mary Sumner Bryant Kingsbury. His father, a native of Connecticut, was a lineal descendant of Henry Kingsbury who emigrated from England to Massachusetts with John Winthrop in 1630, and with his wife was among the original twenty-six members of the First Church, Boston. Russell Kingsbury arrived in North Carolina between 1812 and 1815 and settled in Granville County, where he became a farmer and merchant. A lover of books, he owned and read works by some of the best authors. He served as a town commissioner of Oxford and as a trustee of the Oxford Male and Female academies. Theodore Bryant Kingsbury's mother, a native of Scotland Neck and a member of a prominent North Carolina family, died in 1836 when he was eight.

Kingsbury's delicate health during childhood, plus his father's example, caused him to form an early taste for books rather than the active sports that fascinated his young friends. According to memoranda of his readings that he kept as a youth, he was a habitual reader from age nine, perusing the writings of Plutarch, Hume, Smollett, Miller, Josephus, and Shakespeare as well as Rollin's Ancient History, certain volumes of Jared Sparks's Library of American Biography, and other solid works. He studied at the Oxford Male Academy and later at the Lovejoy Academy, Raleigh, where he was captain of the student cadet corps. In 1847–48 he attended The University of North Carolina, where he gained recognition as a skillful writer, but left without graduating. His father wished him to study law and offered to finance his way through the Harvard Law School, but the young man chose instead to enter the mercantile business, which he followed for seven years.

Early in 1858 Kingsbury became editor of the Leisure Hour: A Literary and Family Journal, a weekly newspaper owned and published by F. K. Strother at Oxford. Kingsbury filled the paper's columns with scholarly essays on literature, history, and biography, attracting favorable attention outside the state and drawing high praise from—among others—John R. Thompson, editor of the Southern Literary Messenger of Richmond, Va., and Paul H. Hayne, the noted poet, then editor of Russell's Magazine published in Charleston, S.C. At home the Leisure Hour was less well received. When Kingsbury relinquished his editorship on 27 Jan. 1859, Strother pledged to continue the paper, promising to make it "a news weekly of the family and literary type"; he hoped to dispel the reputation it had acquired under Kingsbury that it took two people to read it—one to hold the paper and the other to look up words in the dictionary.

In June 1859 Kingsbury declined a professorship of literature at Trinity College in order to prepare himself for the Methodist ministry, which he soon entered. On three separate occasions he declined the editorship of the North Carolina Christian Advocate, the official organ of North Carolina Methodists. About 1866 he left the Methodist Episcopal Church, South, and became a Baptist as a consequence of his changed views on baptism, which he set forth in a book of 275 pages, What Is Baptism? (1867). From 1866 to 1869, he served as pastor of the First Baptist Church, Warrenton, while editing—from 9 Jan. 1867—a new weekly and semiweekly newspaper, the Warrenton Indicator. He also briefly held a post with the Southern Baptist Convention. In 1868 Wake Forest College awarded him the honorary degree of doctor of divinity in recognition of his services to the Baptist denomination.

In March 1869 Kingsbury left the ministry to become associate editor of the Raleigh Sentinel, of which Josiah Turner was editor and which was published during this period as a weekly, semiweekly, and daily. In 1874 and 1875 Kingsbury edited S. D. Poole's Educational Journal. In September 1874, when the periodical was moved from New Bern to Raleigh, he became associate editor of Poole's literary and historical magazine, Our Living and Our Dead, which after October 1873 served as the official journal of the North Carolina branch of the Southern Historical Society. Kingsbury wrote numerous historical and biographical sketches for the magazine as well as many essays on such subjects as education, southern textbooks, plagiarism, and poetry. Though he was one of the better informed southern literary critics of the period, he reviewed few books in detail, having little time to read.

In 1876 he accepted a position on the editorial staff of the Wilmington Morning Star, where he remained until becoming editor of the Wilmington Messenger in 1888. From May 1902, when he retired from the Messenger, until 3 Sept. 1911, he contributed weekly articles on a variety of subjects to the Sunday edition of the Raleigh News and Observer. By his own generation Kingsbury was highly regarded as both an editor and a literary critic, and in 1888 he received an honorary doctor of letters degree from The University of North Carolina. The total volume of his writings was enormous and included a great deal of historical and biographical material. In addition to his contributions to the magazines and newspapers he served in an editorial capacity, he wrote a number of books—among them a guide to the Philadelphia Centennial Exposition—and was the author of some twelve sketches in Biographical Contributions of Harvard University, edited by Justin Winsor.

On 1 May 1851 Kingsbury married Sallie Jones Atkinson, the daughter of General Roger P. Atkinson of Virginia, a relative of descendants of Thomas Jefferson, the Randolphs, Lees, and Pryors, and his wife, Margaret M. Littlejohn Atkinson, formerly of Oxford. The couple had nine children. Kingsbury died at his home in Wilmington, survived by his widow, two daughters, and a son, Dr. Walter Russell Kingsbury. Funeral services were conducted from the residence, with burial the following day at Oxford.

Before the Civil War Kingsbury was a Henry Clay Whig; after the war he was a Democrat. In later life he reaffiliated with the Methodist church.

My mother is Olga Ann

Dear Anell:
Dr. Kingsbury is my great great grandfather. I have his portrait painted when he was 12 in my dining room. My father was Theodore Kingsbury Lynch. Alice, Dr. Kingsbury daughter was his grandmother. I will be glad to share any information you might need. Please feel free to contact me my email.

Thank you for posting your inquiry to NCpedia. I just sent you an email but wanted to respond here as well.

For help in finding information about Walter Kingsbury, you may wish to submit an inquiry to the Genealogy Services Section of the NC Government & Heritage Library. Their email address is slnc.reference@ncdcr.gov. There are guidelines for submitting inquiries to them at http://statelibrary.ncdcr.gov/ghl/faq.html#genealogy