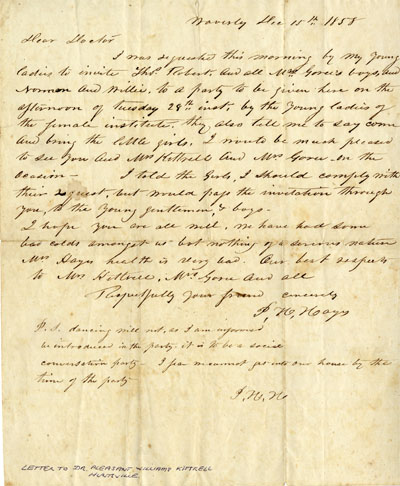 Pleasant Williams Kittrell, physician, politician, legislator, and planter, was born at his father's plantation near Chapel Hill, although some accounts based on family tradition show his birthplace as Kittrell Springs in Granville (now Vance) County. He was the son of Rowland Bryant and Mary A. Norman Kittrell. During his childhood and adolescent years he lived in a rural home adjacent to the campus of The University of North Carolina, from which he was graduated with honors in 1822, at age seventeen. Kittrell apprenticed in medicine with Dr. John King of Anson County and studied at the Medical College of the University of Pennsylvania during the 1824–25 academic year. Afterwards he practiced medicine, acquired land and slaves as an active planter, and was postmaster at Sneedsborough, on the Pee Dee River, in Anson County. In 1833 he was elected to the first of two terms in the North Carolina legislature, and the following year was appointed a member of the board of trustees of The University of North Carolina.

In 1837, after the death of his father, who had migrated to Alabama about 1830, Kittrell moved with his family and servants to Greene County, Ala., to claim a substantial inheritance of farmland and slaves. His application to practice medicine is supported by an affidavit, dated 1845, citing his study under Dr. John King in North Carolina. Kittrell again became involved in politics and was elected to two terms in the Alabama legislature, in 1844 and 1846. He was awarded an honorary master of arts degree by the University of Alabama in 1847.

Kittrell left Alabama in 1850 with other Greene County families (including the family of his father-in-law, Dr. Langston James Goree, of Perry County, Ala.), moved to Texas, and settled at a new plantation, Prairie View, near Huntsville in Walker (now Madison) County. He conducted an active medical practice and extensive stock raising and farming activities in Walker, Madison, Trinity, and Polk (now San Jacinto) counties, which are described in detail in journals he maintained from 1854 to 1867. Kittrell also served two terms in the Texas legislature from 1855 to 1858. He was chairman of the House Committee on Education and led the fight for the University Act of 1858, which was passed and adopted, authorizing the establishment of a state university. In 1866 he was appointed to the first board of trustees of the University of Texas. The turmoil of Reconstruction delayed the opening of the university until 1886, but Kittrell shared with Dr. Oscar Cooper the traditional title, "Father of the University of Texas." In addition, he was a trustee of Austin College (now at Sherman, Tex.) and Andrew Female College at Huntsville.

In 1858 he moved from Prairie View, now in Madison County, which he helped create in 1856, to his plantation in eastern Walker County, Cedar Grove, fourteen miles from Huntsville. Cedar Grove was adjacent to Raven Hill, the plantation of his widowed sister, Sarah Williams Kittrell Goree, and formerly the home of his friend and political foe, General Sam Houston. Census and tax records for 1860 show that Kittrell was the wealthiest planter and slaveholder in Walker County; the strife and hardship of the Civil War years that followed are only suggested by his personal journals that tell of a loan made by a former slave and freedman, Jordan Goree, that enabled him to pay his taxes the year after the Civil War ended.

Kittrell was active and influential in the establishment and administration of institutions of higher education in three states, as well as an upright and vocal but contentious and controversial politician. A determined Secessionist, he strongly opposed Governor Sam Houston's efforts to keep Texas in the Union prior to the Civil War. Kittrell died in the same bedroom as had Sam Houston four years earlier, in the Steamboat House at Huntsville, a victim of yellow fever. He was buried at Oakwood Cemetery, Huntsville. His portrait hangs in the foyer of the president's office at the University of Texas, and he is memorialized at the Education Hall of Fame in Dallas.

Norman Goree Kittrell, Governors Who Have Been, and Other Public Men of Texas (1921).