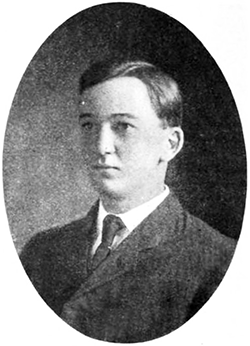 Benjamin Rice Lacy, Jr., Presbyterian clergyman, educator, and author, was born in Raleigh. His father was a pioneer in promoting labor organizations in North Carolina and treasurer of the state from 1901 to 1928. His grandfather, Drury Lacy, was also a Presbyterian minister and president of Davidson College. His mother was Mary Burwell Lacy, daughter of the president of Peace Institute in Raleigh. After attending the Raleigh Male Academy, young Lacy entered Davidson College where he was the star quarter-back on the football team. Following his graduation with a degree in history, he was awarded a Rhodes Scholarship for study at Oxford University during 1907–10. In 1913 he received a bachelor of divinity degree from Union Theological Seminary in Richmond and was awarded the Hoge Fellowship for the next year. While at the seminary, he taught church history.

During World War I Lacy served as a chaplain with the 113th Field Artillery. Because of his heroism in aiding the wounded before the German lines in France, he became known as the "Fighting Parson." It was later noted that on one occasion a deserted German battery with guns and ammunition was found, but it could not be turned against the enemy because all of the instructions were in German. Chaplain Lacy, who was able to decipher the tables and symbols, took charge and for two hours joined in operating the guns in well-directed fire.

After the war he served briefly as pastor of a church in Johnston County before being named pastor of Central Presbyterian Church in Atlanta. In 1926 he became president of Union Theological Seminary, where he remained until his retirement in 1956. During these years he sat on a number of councils and committees and in 1948 was the U.S. representative to the International Conference on Theological Education in Geneva. In 1950 he was moderator of the Presbyterian Church of the United States. Among other works, Lacy was the author of Revival in the Midst of the Years. He received honorary degrees from Davidson College, Duke University, Hampden-Sydney College, the University of Richmond, and The University of North Carolina.

In 1919 Lacy married Emma Elizabeth White, daughter of the pastor of the First Presbyterian Church in Raleigh. They were the parents of two sons and a daughter. A portrait of him hangs in the Nevill Ray House in Richmond.