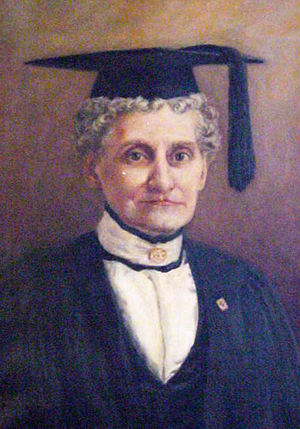 Emma Augusta Lehman, teacher and poet, was born at Bethania, the daughter of Eugene Christian and Amanda Sophia Butler Lehman. Her father was director of the village orchestra. She had two brothers, John Henry and Oliver J., and a sister, Sallie E. (Mrs. Kapp). Sent by her moravians">Moravian parents to Salem Academy at age thirteen, she was graduated in three years. At sixteen, she was put in charge of the school at Bethania, and she later taught at a school near Pilot Mountain. In 1864 she became a member of the faculty at Salem Academy, where she remained for fifty-two years. English literature was her specialty, but she also taught piano, art, astronomy, and botany. When she discovered a previously unknown plant, it was named Monotropsis lehmani in her honor.

Though a small, frail person, Emma Lehman was a strict disciplinarian who inspired her students. Her bright round eyes gleamed with intelligence and curiosity. Her Sketches of European Travels (1890) tells, in the fashion of the day, of England, France, Italy, and a brief Rhine journey. Among the forty-seven pages in her Poems (1904) are such titles as "Queen Flora's Opening Day," "At Easter-Tide," "Sunset on Pilot Mountain," "North Carolina's Heroes," "Our Graveyard Cedars," and "Sesqui-Centennial Ode: On the 150th Anniversary of the Arrival of the Moravian Settlers in Wachovia, N.C." Salem College awarded her an honorary M.S. degree in 1914 to celebrate her fiftieth year as a teacher there. Her name has been perpetuated in the endowed Emma Lehman Chair of Literature at the college.

I have a hand typed account of the Butner Family History from the original written words by Emma Augustus Lehman.
I was fascinated to see she had a book of poems and where I could find those poems? I have traced my grandfather Butner's roots back to her and the Wolfe family( According to Emma) a