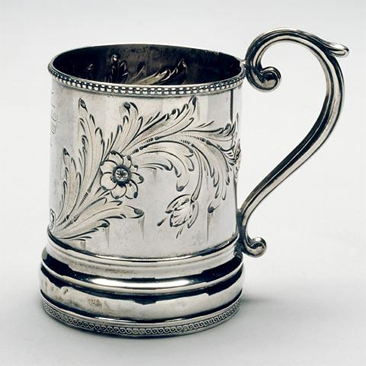 Traugott Leinbach, silver-smith and watchmaker, was born in the Moravian community of Salem, the son of Johannes Ludwig and Anna Barbara Lauer Leinbach. The father, frequently called John or J. L. Leinbach in the Moravian records, was a man of good repute and the owner of considerable property, including an oil and flaxseed business, a sawmill, a cotton gin, and land. Later in life, however, he experienced business difficulties which also involved his sons Johann Heinrich and Traugott; an outcome of these financial entanglements was that Traugott, security for his father, agreed to a public sale of the latter's property, then bought his home for seven hundred dollars and sold it to "the Trustees."

In the 16 July 1811 minutes of the Aufseher Collegium is a notation that John Vogler had taken Traugott Leinbach into his silversmith and watch shop on a trial basis. Three months later it was reported that the boy had completed his probationary period and had been accepted as an apprentice to Vogler. This apprenticeship was concluded in the summer of 1819.

In February 1821 Leinbach and four others from the Salem congregation set out for Bethlehem, Pa., where on 15 March Traugott married the Single Sister Maria Theresia Lange, a member of the Bethlehem Moravian settlement. The young couple then returned to Salem, where the silversmith had established his own shop in the older part of the Brothers' House. In 1823 the Aufseher Collegium approved Leinbach's plan for his new home, and a year later he relinquished his shop space in the Brothers' House. By that time his dwelling on "the building lot north of Thomas Wohlfahrt, near the corner lot opposite the tavern" had been completed. The Bethania Diary for 28 Jan. 1828 recorded the designation of Traugott Leinbach's house as the headquarters for the Salem branch of the Cape Fear Bank, since "the committee insisted that it [the bank headquarters] must be in a stone house" even though Leinbach's house was made of brick. The main objective was probably to provide storage space for a safe; Dr. F. H. Schumann was named agent of the Salem branch.

Among the few extant silver articles that Leinbach made are two cups and several spoons. Characterized by a simplicity of basic design and meticulous elegance in engraving and ornamentation, these pieces attest to his skill as a craftsman. In addition to being a silver-smith, Leinbach was also a watchmaker and may have been a pioneer in the field of photography. This is suggested by the 22 Aug. 1834 entry of Heinrich Leinbach (Traugott's older brother and a master shoemaker) in his diary: "I saw my brother's [Traugott's] Galvanic battery in operation, he has also got a Daguerreotype Apparatus, all of which he bought of a gentleman who also instructed him how to operate [it]."

The silversmith's election to various positions of responsibility in Salem indicates that he was a respected and successful businessman. One apprentice who worked under him was Samuel Kitschelt, who had worked for the silversmith Miksch in Bethlehem before Kitschelt moved to Salem in 1826. According to the Aufseher minutes for 22 July 1833, another boy, Aug[ustine?] Reude, was "put on trial with Br. T. Leinbach, Sr." Leinbach's own son Nathaniel Augustine, who was born in Salem on 28 Aug. 1832, also learned the silversmith's trade from his father and worked for a while as a craftsman; he later studied medicine and moved to Bethlehem in 1861. To another son, William Felix, Leinbach in 1869 transferred his house in Salem before moving back to Bethlehem. Three years later the silversmith died in Bethlehem.