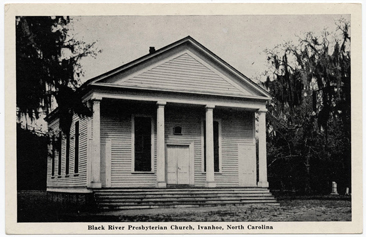 Colin Lindsay, Presbyterian minister, was one of the first ministers in the Orange Presbytery and a bitter opponent of the Great Revival in the early 1800s. He was born in Scotland into a large, wealthy family. He received his commission to preach in Scotland before emigrating to North Carolina in 1792. He landed in Wilmington and was admitted into Orange Presbytery by October 1792.

The first position Lindsay held in North Carolina was as pastor at Black River Chapel, now in southern Sampson County. He held two services each Sunday, the first in English and the second in Gaelic, the latter for the older members of the congregation. His reputation for indulgence and outspoken independence began here when members of his congregation accused him of violating the Sabbath. Lindsay had bought a yoke of oxen on Saturday and had someone drive them home the next day, since there was no food for them at the place of purchase. This act divided his congregation so Lindsay decided to leave. From Black River, he moved farther into the Scottish settlement along the Upper Cape Fear. He held posts at Raft Swamp (now in Hoke County), Longstreet (now in Cumberland County), and Bethel (now in Hoke County). Lindsay donated the land on which Bethel Church was built.

His first confrontation with the presbytery came in April 1796, when he was charged with "intoxication, profane swearing, and intention of dueling." He was found guilty and was suspended from the pulpit until he expressed sufficient "sorrow and reformation." He was restored to his position on 13 Nov. 1797. In March 1798 he was charged with "drunkenness and conduct unbecoming to an Elder" and was again suspended by the presbytery. The same thing happened in 1800, but in 1801 he repented and said that he had "acted contumaciously . . . and sinned as other men, from the depravity of nature . . . Truly Sorry." Again he was restored to the pulpit. On 1 June 1803 Lindsay was deposed from Orange Presbytery. Although these charges were a factor in his dismissal, his opposition to the Great Revival recently embraced by the Presbyterian church was the ultimate reason for his removal. A traditionalist in religious matters, Lindsay was unable to accept the emotional behavior of the evangelical movement. The Reverend Leonard Prather accused him of "calling the present Revival the work of the Devil," and Lindsay often referred to his opponents in the presbytery as "illiterate boys."

Lindsay continued to preach to a small band of followers in present Scotland County, claiming that he had received his commission to preach, not from Orange Presbytery, but from the "High Kirk" of Scotland. He declared that he would preach "in spite of presbyteries and their little devils." His will to preach was very strong; during his later years, he spoke from a sitting position when unable to stand.

He is perhaps best remembered for a story that he told about his mother. Very ill, she lapsed into a coma and was pronounced dead. Funeral services were held and she was buried. When mourners returned to the cemetery, they stumbled on a pair of thieves who had opened her grave to steal her valuables. When the thieves had tried to cut a ring from her finger, the shock apparently restored her circulation and she returned to consciousness. The thieves ran in terror, while the mourners rejoiced and took the woman home where she was nursed back to health. Colin Lindsay was born a few years later.

Lindsay spent the latter part of his life at Hill's Creek, below the Turnpike Bridge (now in Scotland County). He died childless, survived only by his wife, whose maiden name was Hamilton, and was buried in Old Stewartsville Cemetery in Scotland County.