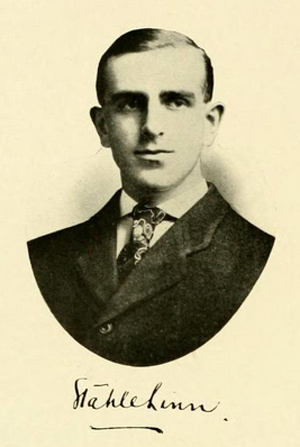 Stahle Linn, state senator, judge, and corporation lawyer, was born in Salisbury, the older son of Thomas Calvin and Annie Doll Stahle Linn. His mother was from Gettysburg, Pa., a descendant of Captain Jacob Stahle who commanded a fleet of boats at George Washington's crossing of the Delaware. The Linns settled in Rowan County, N.C., before 1753.

Linn was educated at Horner Military School and The University of North Carolina, where he received the LL.B. degree. He became an attorney for the Southern Railway as well as president of the Post Publishing Company (publisher of the Salisbury Post ), chairman of the board of managers of the Wachovia Bank and Trust Company, a member of the Wachovia board of directors, and a director of the China Grove Cotton Mills. He was a member of the state senate during the 1917 session. He also served for ten years as a member of the Salisbury city school board and was a judge of the Rowan County Court. Linn was a trustee of the Consolidated University of North Carolina and a member of the John Motley Morehead Scholarship Foundation awards committee. Also a trustee of Catawba College, he was awarded a doctor of laws degree by that institution in 1943.

In 1925 he married Charlotte McNair Brown in Salisbury and they became the parents of Mary Anne (Mrs. James Leake Woodson) and Stahle, Jr. He was buried in Chestnut Hill Cemetery, Salisbury. Linn's portrait hangs in the superior courtroom in the Rowan County courthouse.