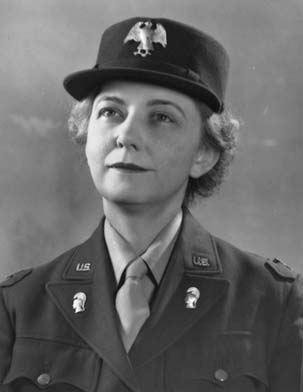 Westray Battle Long, second director of the Women's Army Corps, was born in Rocky Mount, the daughter of Jacob, Jr., and Mattie Nash Wright Battle. The Battle family had immigrated from England to Virginia in 1654 and had settled in Edgecombe County in 1747. Westray attended the Women's College of the University of North Carolina at Greensboro (1918–19), where she was president of her class, and Pell's Law School in Raleigh (1921–22).

From 1919 to 1924 she worked in local and general insurance agencies and in the home office of an insurance company in Raleigh, and from 1929 to 1934 she worked with her first husband in the Boyce Insurance Agency in Gastonia. Entering civilian service of the federal government in Washington, D.C., in March 1934, she served with the National Recovery Administration as administrative director of the Litigation Division (1934–35); with the Rural Electrification Administration, first as administrative assistant to the general counsel and later as chief of the insurance section (1936–40); and with the Federal Works Agency as assistant chief of the insurance section (1941–42). In 1938 she was the principal speaker at the convention of the Mutual Alliance, an organization of mutual casualty insurance companies, and at the convention of the International Society of Casualty and Surety Companies, which was composed of the country's leading stock casualty insurance companies.

In August 1942 Westray Battle Boyce, her name during these years, entered military service as an officer candidate in the Women's Army Auxiliary Corps, transferring to the Women's Army Corps in September 1943, when the WAAC became the WAC. Commissioned third officer (equivalent to second lieutenant) on 12 Sept. 1942, she was appointed WAAC staff director at Headquarters Fourth Service Command, Atlanta, Ga., the following October. She was promoted to the grade of first officer (captain) on 23 Dec. 1942.

In August 1943 she was transferred to the North African theater of operations as WAAC staff director under General Dwight D. Eisenhower and promoted to the grade of major. In that capacity, she was responsible for the reenlistment of WAACs assigned to North Africa in the Women's Army Corps effective 1 Sept. 1943 and for the health and welfare of all WACs in the North African theater and later the Mediterranean theater. Over two thousand women, assigned to approximately twenty different locations throughout North Africa and Italy, were under her command. Promoted to the grade of lieutenant colonel on 8 Feb. 1944, she received the European-African ribbon with battle star and the Legion of Merit for her work during the latter assignment. This was the first Legion of Merit to be awarded to a woman. 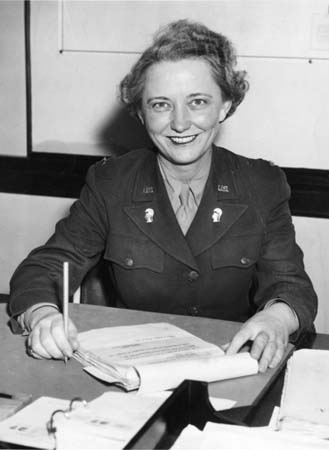 In August 1944 she was transferred to the War Department General Staff, Washington, D.C., and assigned as military personnel staff officer of Personnel Division, G 1. She represented her division on the team engaged in extensive study of psychoneurosis in the army. This study, which lasted approximately eight months, involved consideration of army standards for the induction, training, and assignment of all personnel, and for the treatment and possible discharge of those psychiatrically ill.

In May 1945 she was named deputy director of the Women's Army Corps. The following July she was appointed to succeed Colonel Oveta Culp Hobby as director of the corps and promoted to the grade of colonel. As director, she was responsible for the health and welfare of all WACs as well as for recommendations to the chief of staff concerning the reduction of the strength of the corps. In September 1945 she made a flight around the world to arrange for the orderly return to the United States of WACs eligible for discharge and subsequently was awarded the Pacific theater ribbon. In November 1946, on an inspection tour, she visited installations in the European theater. Westray served as director of the Women's Air Corps until March 1947, when she was hospitalized; she was retired for physical disability effective 7 May 1947.

In January 1946 Colonel Boyce was awarded an Oak Leaf Cluster to the Legion of Merit for her work concerning the problems of psychoneurosis in the army and for her service as director of the WAC. In November 1946 she was the first woman to receive the Cross of Military Service, conferred by the United Daughters of the Confederacy.

Westray Battle Long was married three times: on 11 Nov. 1924 to James Stacy Boyce, of Gastonia, from whom she was divorced in 1941; on 30 July 1948 to William Leslie, of New York, who died in November 1962; and on 22 Dec. 1964 to Willie Jones Long of Garysburg, N.C. From her first marriage she had a daughter, Westray, who married James Roy Nicholas of New York. An Episcopalian and a Democrat, Westray Battle Long died in Walter Reed Hospital in Washington, D.C., and was buried in the old Battle family burial ground near Cool Spring Plantation in Edgecombe County. A portrait of her in uniform is in the Archives Building in Raleigh. Her wartime papers are at the Truman Memorial Library in Independence, Mo.

Herbert B. Battle, comp., The Battle Book: A Genealogy of the Battle Family in America (1930)