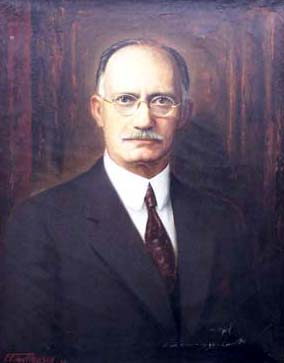 William Joseph Martin, Jr., college president and churchman, was born in Columbia, Tenn., the son of Colonel William Joseph Martin of Richmond, Va., and his wife, Letitia Coddington Costin of Wilmington, N.C. When he was four, his parents moved to Davidson, N.C., where his father held the chair of chemistry at Davidson College until his death in 1896 and for a time served as vice-president and then acting president.

After attending local schools, young Martin entered the Reidsville Academy for Boys in South Carolina. He was graduated from Davidson College in 1888 and received a master's degree the following year. He then earned M.D. and Ph.D. degrees from the University of Virginia, where he also was an instructor in chemistry. He pursued further graduate study at Johns Hopkins and at the Polyclinic and Manhattan Eye and Ear Hospital in New York. In 1888 and 1889 he taught briefly at Presbyterian College in Clinton, S.C., and during the illness of his father he filled in for him at Davidson by teaching chemistry.

These stints at Clinton and Davidson convinced Martin that he preferred teaching to the practice of the sciences. At the death of his father in 1896, he became Chambers Professor of Chemistry at Davidson; from time to time he also served as bursar and proctor. In 1912 he was elected president of the college and served "with notable skill and commensurate success" until his retirement in 1929. During his term as president—the longest in Davidson's history—the institution survived two crises and experienced a windfall. World War I drained the campus of many of its students until Martin secured a Student Army Training Corps program. In 1921 the Chambers Building, the largest on campus, burned to the ground, but he secured funds to replace it with a bigger and better building. Finally, in 1925, at the time of the magnificent James B. Duke endowment, he laid plans for its wise use in the future.

Following his retirement Martin accepted the presidency of the Assembly's Training School of the Presbyterian Church of the United States, in Richmond, Va., where he served until 1933. Six years later he returned to Davidson and began taking courses in chemistry and political science.

The recipient of numerous honors, Martin was a member of Phi Beta Kappa and was active in the Mecklenburg County and North Carolina medical societies. He received honorary degrees from Wake Forest College, Central University of Kentucky, and Davidson College. He demonstrated a lifelong devotion to the Presbyterian church and served on many important committees of the presbytery and General Assembly. In 1914 he was moderator of the General Assembly of the Presbyterian Church of the United States.

Martin and his second wife were buried in the Davidson College cemetery.