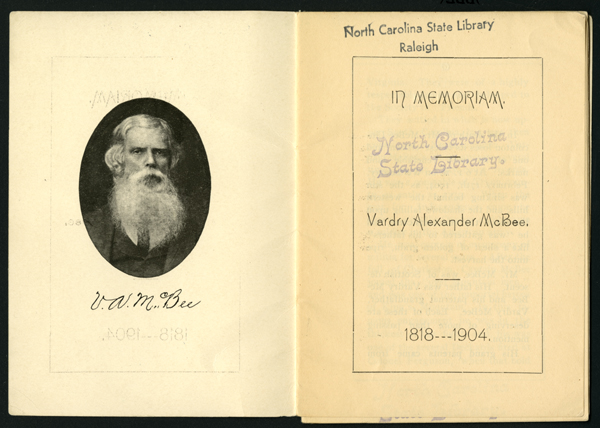 Vardry McBee, merchant, farmer, and clerk of county court, was born in Spartanburg District, S.C., the son of Quakers who had moved to the area from Virginia. His father, also named Vardry, was captain of a militia company in the American Revolution though he was a Quaker. McBee left school when he was twelve and worked for six years, then moved to Lincolnton to learn to be a saddler under Joseph Morris, his brother-in-law. He went to Kentucky for a short time with his parents, then to Tennessee, before returning to Lincolnton as co-owner of a store. About 1805 he sold his interest in the store and bought a farm.

McBee was clerk of the Lincoln County Court from 1812 to 1833. A strong supporter of schools, he helped found and support the Pleasant Retreat Academy for boys and the Lincolnton Female Academy, both in Lincolnton, and served as a trustee. He also was a delegate from Lincoln County to the state Internal Improvement Convention in Raleigh in 1833.

About 1815 McBee bought several thousand acres of land around Greenville, S.C., where he eventually built several flour mills, a paper mill, a cotton factory, and a wool factory. In 1836 he moved to Greenville to be nearer his large holdings of land and mills and to farm. He was active in agricultural organizations and won several prizes for the quality of his farm. In South Carolina McBee owned stock in a number of railroads and was president of the Louisville and Cincinnati Railroad. He continued to support education and religious institutions.