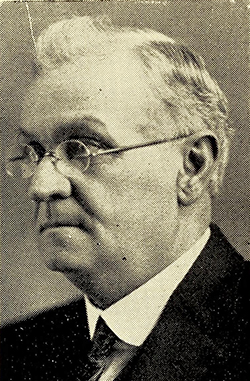 Edwin Lee Middleton, educator and Sunday school administrator, was born near Warsaw in rural Duplin County, the son of David John and Lucy Jane Nicholson Middleton. The family was English, and the first of the direct line who came to America was Robert Middleton, who migrated to Virginia in 1663. Robert's son moved to North Carolina, and later his son (the third American generation) took a grant of land in what is now Duplin County. It was there that David John lived and married Mrs. Nicholson, the widow of a Methodist minister.

One of seven children (six sons and a daughter), Edwin Lee grew up in the years of economic and social confusion following the Civil War. His father was an active Baptist, a member first of the Kenansville church and later of the Johnsons church. He indoctrinated his children in the values of the church and all of them became Baptists. The Middletons provided the best education possible for their children: tutors in the home and select private schools in the community.

In 1884, at age eighteen, Edwin Lee enrolled in Wake Forest College and four years later was graduated with honors with a bachelor of arts degree. Choosing education as his profession, he taught successively in established schools in Wilson, Durham, and Cary (1888–1908). During those years he acquired a reputation as a good student himself, and through his meticulous teaching developed the same qualities in many of his students. He expressed great pride in the large number of his former pupils who went on to college and who entered the major professions of teaching, medicine, the law, and the ministry.

Even before his college days, Middleton was an active church member. Especially interested in a budding program in North Carolina Baptist churches known as Sunday schools, he concentrated his efforts on building the valued instructional emphases, as well as directing the organizational pattern of this new adjunct to local church life.

With such a background, he was the logical choice of the North Carolina Baptist State Convention to be its first Sunday School secretary. For twenty years Middleton effectively led the denomination's program in North Carolina, establishing a standard Sunday school in almost every Baptist church in the state. A leader in this expanding movement southwide, he made extraordinary progress in developing Sunday schools in rural communities. He placed great emphasis on teacher training, encouraging thousands to complete the Convention Normal Course through class and home study.

In conjunction with these efforts, Middleton soon developed an active interest in church architecture. The records indicate that during one year alone, he assisted 670 Baptist churches in North Carolina, providing plans and consulting with their contractors and building committees. He regarded this work as an essential part of building good Sunday schools in order to provide them with adequate physical facilities that would be both attractive and comfortable.

After working in the Sunday school movement for fifteen years, he wrote a book entitled Building a Country Sunday School (1923), which became a manual for those interested in implementing his ideas for the expansion and promotion of Sunday schools. He touched every county and every Baptist association in North Carolina with his message, and although he remained loyal to his rural brethren, his efforts found a vast harvest in towns and cities across the state.

Although he was not an ordained minister, Middleton traveled widely in North Carolina, preaching, teaching study classes, conducting conferences, and visiting local churches that had asked for his help. He had no time for civic affairs as such but devoted himself with singleness to promoting Sunday schools wherever there was a need and he could get a hearing.

Notwithstanding his concentration on these activities, Middleton was a leader in every aspect of organized Baptist life in North Carolina. For many years prior to his death he served as statistical secretary of the Baptist State Convention. In that "behind-the-scenes" post, he plotted the numerical and financial growth of the denomination each year, compiling his reports from a study of the convention's minutes for the preceding twelve months. It was said that his records not only were accurate but also were more promptly produced than in any other state in the Southern Baptist territory.

While teaching in Durham, he married Mary Eva Rigsbee, who came from a family of religious leaders who were prominent in the life of the city and state and devout members of the First Baptist Church, Durham. The Middletons had six children. The oldest and the youngest two died in infancy. Three grew to maturity: Lucy Kate (Mrs. Robert W. Taylor, Jr.), Mary Rachel (Mrs. James Stanley Brown), and Robert Lee, who married Sarah Edwards of Raleigh. Robert Lee Middleton was for many years head of the Accounting Department of the Sunday School Board of the Southern Baptist Convention in Nashville, Tenn., and himself a Sunday school teacher and author of note.

After twenty years of service to Baptist Sunday schools, Middleton became ill and died in the Baptist hospital in Winston-Salem at age sixty-one. He was buried in Raleigh, where he had lived since 1908.