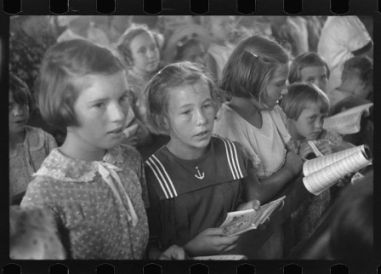 The Sunday school as an instrument for teaching children originated in Gloucester, England, about 1780. Philanthropist Robert Raikes originated the idea out of his concern for the ignorance and rowdy behavior of the children of the poor. By the 1790s several schools existed in America, particularly in Philadelphia, where before 1800 more than 2,000 children received instruction in reading and copying from the Bible. The schools were operated by various religious or humanitarian groups, with the former especially emphasizing religious and moral instruction. Presbyterians and Methodists enthusiastically supported these opportunities to teach the children of the unchurched poor.

The first Sunday school in North Carolina was organized by Gottlieb Schober, pastor of the Hopewell Lutheran Church (now Hopewell Moravian Church) near Salem in 1813, with instruction in reading and singing. Under Schober's leadership, the Moravian Single Sisters taught English and German to some 25 children of non-Moravian farmers. The results were gratifying, and the Sunday school concept spread to surrounding counties under Moravian leadership.

Because North Carolina's backcountry had but a few field schools for those who could afford to pay, Sunday schools offered a vital opportunity for the children of yeoman farmers. While religious education was important from the beginning, training in reading, spelling, arithmetic, and writing often proved more enduring. In Stokes County alone, some 1,200 children marched through the streets of Salem in 1830 in the parade of students initiating a new school season. Schober, president of the county Sunday School Union, led the procession at age 74 and acknowledged his pride in seeing "so many young people from our neighborhood, who through the Sunday Schools not only have an opportunity to learn to read, but also to become acquainted with the word of God."

The Sunday school movement waned in the late antebellum period in North Carolina, particularly as the number of public schools began to grow within the state. But in more isolated areas, Sunday schools continued to be the only opportunity for children to gain a degree of literacy. By the late nineteenth century, the American Sunday School Union gained new momentum through the development of a systematic curriculum of biblical study, the International Uniform Lessons, with various denominations providing their own literature for teachers and students to emphasize particular perspectives. The Christian nurture of children remained important throughout the twentieth century, and the need for religious education of all age groups was acknowledged. In the early 2000s, Sunday schools continue to serve an important role in religious and biblical education in many communities.