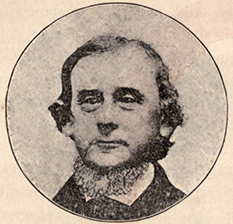 Godwin Cotton Moore, physician and political and religious leader, was born in Hertford County, the oldest of three children of James Wright and Esther Cotton Moore. The elder Moore had moved to Hertford from Nansemond County, Va., on his marriage to Esther. Godwin's maternal great-grandfather, Arthur Cotton, is said to have settled near the village of St. Johns in what is now Hertford County on his marriage to Elizabeth Rutland, the daughter of James Rutland. He was the builder of Mulberry Grove, the brick plantation house that young Moore later inherited.

Godwin Moore was prepared for college at the Hertford Academy, Murfreesboro (then operated by Thomas O'Grady), and at the Bingham School, Hillsborough, entering The University of North Carolina in 1822. His studies were interrupted prior to completion of his junior year. Subsequently, he studied medicine with his brother-in-law, Dr. N. P. Fletcher, in Brunswick County, Va. He then enrolled in the Medical College of the University of Pennsylvania, receiving the M.D. degree in 1828. Afterwards Moore attained considerable success as a general practitioner in Hertford, Northampton, and Bertie counties.

Although he was a Democrat residing in predominately Whig territory, Moore was elected to represent Hertford County in the House of Commons in 1831 and in the senate in 1842. He lost bids to serve as a delegate to the state convention in 1835 and to the U.S. House of Representatives in 1837. In later years, he served successive terms in the state house of representatives (1866–67 and 1867–68).

Deeply concerned with religion and education, Moore made his most significant contributions in these two areas. For thirty-six years he was the influential moderator of the annual sessions of the Chowan Baptist Association, an organization that consisted of sixty-eight churches in northeastern North Carolina at the time of his death. He was elected to numerous leadership posts in the Baptist State Convention of North Carolina, including membership on its board of managers (1842–44), vice-president (1847–54), and trustee (1849–67). He was also a member of the board of trustees of Wake Forest College (1838–60).

In connection with his work among the Baptists of the Chowan Association, Moore is credited with being the leading spirit behind the founding and early operation of Chowan Baptist Female Institute (now Chowan College). As the first chairman of the institution's board of trustees (1848–67), he was given much of the responsibility for securing and maintaining adequate facilities and instructional staff. He contributed liberally to the financial support of the school during its fledgling years and was instrumental in devising methods that saved the debt-plagued institution from early bankruptcy.

"Godwin Cotten Moore (Hertford County)" Under Both Flags: Civil War in the Albemarle, Museum of the Albemarle. 2011. http://underbothflags.ncdcr.gov/home-front-characters/godwin-cotten-moor...  (accessed January 13, 2013).