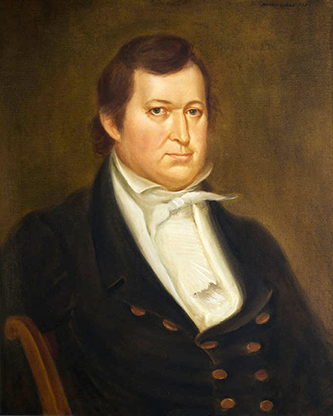 John Murphy, lawyer, planter, and politician, was born in Robeson County, the son of Neil Murphy (a recent immigrant from Scotland) and the former Miss Downing. While he was still a child, the family moved to South Carolina. Later he taught school in order to pay expenses at South Carolina College (now the University of South Carolina), where he was president of the Clariosophic Society and was one of the academic leaders of his class. Graduating in 1808, he was elected to the board of trustees of South Carolina College in 1809 and again in 1813, the first alumnus to be elected to that body. After studying law, he was admitted to the bar and served as secretary of the South Carolina Senate from 1810 to 1818.

Murphy moved to Alabama in 1818, settling in Monroe County. He was admitted to the state bar but gave much of his attention to the supervision of his plantation and to politics. In 1819 he represented Monroe County at the Alabama Constitutional Convention and served on the Committee of Fifteen, which prepared the original draft of the Constitution. He was elected to the Alabama House of Representatives in 1820 and to the Alabama Senate in 1822. In the senate, where he served until 1824, he took a particular interest in the state bank and education.

In 1825 and again in 1827, Murphy was elected governor of Alabama without opposition. A member of the North Carolina faction, which was well-entrenched in Alabama politics, he had been handpicked by Governor Israel Pickens, a fellow North Carolinian. Throughout his two terms, Murphy supported the state bank and encouraged the improvement of education, particularly the planning of the University of Alabama. When the Bank of the United States began plans to establish a branch at Mobile in 1826, he protested vigorously on the grounds that creation of the branch would be an invasion of the sovereignty of the state. In 1828 he denounced the Tariff of Abominations. Conceding that a tariff was justified up to a point, he denied that one was justified if it excluded "general and active intercourse with other nations." He recommended adoption of a "temperate remonstrance" calling attention to the injurious effects of the tariff. In 1829 he again advised that judicious and temperate efforts be continued to secure "the constitutional repeal" of the "obnoxious" measure.

Following his two terms as governor, Murphy returned to his plantation in Clarke County. In 1831 he ran unsuccessfully against the ever-popular Dixon Hall Lewis in a race for the congressional seat representing the Mobile District. During the campaign, he supported the Jackson administration and opposed nullification on the grounds that it was subversive to the Union as established under the Constitution.

Elected to the U.S. House of Representatives in 1833 in a race against James Dellet, Murphy served in the Twenty-third Congress. He made no major contributions on Capitol Hill, but when a controversy erupted between the state of Alabama and the national government growing out of the latter's attempt to remove settlers from the Creek lands, Murphy served as a conciliator. Following discussions in Washington, he assured Governor John Gayle that the national government "never intended to expel all the people from the ceded Creek territory."

In 1839 James Dellet defeated Murphy in the contest for the congressional seat he had formerly held. An ardent supporter of the Democratic party, Murphy was active during the presidential campaign in 1840 and served as an elector.

Murphy's first wife was Sarah Hails of South Carolina. In 1832 he married Mrs. Sarah Darington Carter of Clarke County, Ala. One of his sons, Duncan, later served in the California legislature; another son, Murdock, was the first pastor of the Government Street Presbyterian Church in Mobile. Murphy's other children were John, Jr., and Mary Sue. At one time, Murphy served as master of the Grand Lodge of Masons in Alabama. He died at his plantation and was buried at a cemetery near Gosport. His portrait hangs in the main corridor of the Alabama state capitol at Montgomery.

Journal of the House of Representatives of the State of Alabama (1820).

I think that the Robeson

I think that the Robeson County, NC ancestors of Governor John Murphy of Alabama may also be my ancestors, but I have been unable to confirm this. My 3rd great grandmother was Jennet Murphy who married Archibald M. McCormick of what was then Richmond County, NC. Jennet had an unmarried sister, Margaret Murphy, living in their household. Archibald McCormick's will of 1864 mentions Margaret Murphy as his sister-in-law.
I hope someone can help me find out who were the parents of Jennet and Margaret Murphy.

I believe the burial site of

I believe the burial site of John Murphy to be on the property along the Alabama river which had been his plantation. My father Michael K Murphy and myself Micahel B. Murphy believed to be decendants found his headstone as well as his brother and a school teacher that they where familiar with believed to have been brought down from S.C. I have photographs of the site. My father Michael and I spent a week back in 2001 in the Roebson Co. Gosport area and at the State Archives in Motgomery researching our geneology. Locals in Gosport guided us to his grave atop a hill under a massive Magnolia tree.

Thank you for visiting this entry and sharing this information with future NCpedia viewers.