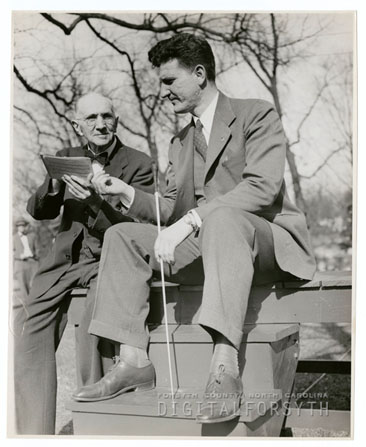 Bernard Jacob Pfohl, church musician, was the oldest son of Christian Thomas and Margaret Siewers Pfohl and the brother of Bishop John Kenneth Pfohl and Dr. Samuel Frederick Pfohl. In 1881 he was graduated from Salem Boys School, which his great-grandfather, the Reverend Christian Thomas Pfohl, had come from Saxony to Salem in 1791 to head and where his grandfather, the Reverend Samuel Thomas Pfohl, also had taught.

B. J. Pfohl began his business career at age fourteen when he went to work at the F. and H. Fries Cotton and Woolen Mills, where his father was in charge of the office. At thirty-two he became secretary of the Fries Manufacturing and Power Company, which was bought by Southern Public Utilities Company in 1913. Pfohl continued with this company as office manager, a position he retained when Southern Public Utilities was bought by Duke Power Company in 1935. Pfohl remained head of the office staff until his retirement in February 1958, shortly after his ninety-first birthday.

It was his leadership and long service in the Moravian Church Band that made Pfohl so well known and well loved by many generations of North Carolinians. As a young boy he began to play in the Home Moravian Church band and at seventeen became its leader. In 1889 he was made director of the Easter Band (the combined bands of the various Moravian churches, which played together in the graveyard for the famous dawn service). Under his constant care and direction for the next fifty-six years, this group grew from ten to more than five hundred players, the largest organization of its kind in the world. "Mr. B. J.," as he was

affectionately known to his "band boys," rehearsed throughout the year a small segment of the large band and gave concerts during the summer on Salem Square. For that group he arranged secular music and for all the church bands he arranged the old Moravian chorales and other hymns. Dr. Douglas L. Rights, writing on the fifty-year celebration of Pfohl's directorship, praised "his patient and persistent leadership. . . . To be a bandman under him means more than musical training. It means a strong impartation of moral and cultural qualities. . . . Some impress of living character is seen wherever we find his boys." In addition to the band parts booklets of Moravian hymns, Mr. B. J. published a history of the organization, The Salem Band (1953). 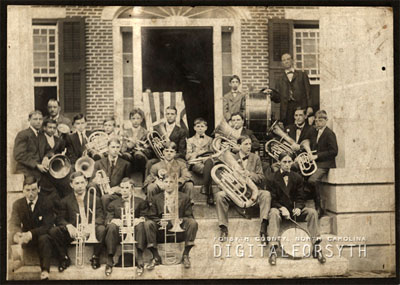 From the time of his confirmation at age fifteen until his death at ninety-four, Pfohl was a devoted member of the Home Moravian Church, serving it chiefly through his work with the church band but also, for a time, as a member of the Board of Central Elders of Salem Congregation. He was one of the founders of the Wachovia Historical Society in 1897 and a charter member of the Winston-Salem Kiwanis Club. In 1956 Moravian College (Bethlehem, Pa.) conferred on him the honorary doctor of humane letters degree.

On 21 Feb. 1901 Pfohl married Sarah Elizabeth Traeger, and they had three children: Joseph Thomas, Henry Clauder, and Katherine Adelaide, all of whom became professional musicians. B. J. Pfohl died in Winston-Salem, where he had spent all of his life, and was buried in God's Acre, the Moravian cemetery.