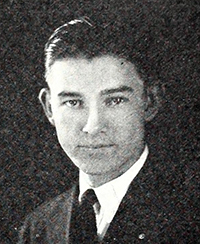 Luther James Phipps, lawyer, layman, and civic and political leader, was born on an Orange County farm to Connie Weaver and Charles Reid Phipps, attended schools in nearby Chapel Hill, and was graduated from The University of North Carolina in 1922 with a B.S. degree in civil engineering. He then studied law there for two years before beginning his forty-five-year career as a practicing attorney and judge in local courts.

While a student at the university in 1918, he joined the Student Army Training Corps and served in the U.S. Army Infantry. He returned to his studies in Chapel Hill with a Julian Carr Fellowship. Phipps held many offices in student government, was tapped for membership in the Order of the Golden Fleece (the highest campus honorary and leadership organization), and was secretary of Phi Beta Kappa honorary scholarship fraternity. In 1922 he was president of his graduating class and received the Major Cain Prize in Mathematics at commencement exercises. In addition, he was a member of Phi Gamma Delta social fraternity and Phi Alpha Delta law fraternity. Throughout his career he was active in the alumni affairs of his alma mater—both as permanent secretary of the Class of 1922 and as an ardent partisan of the university and its leadership.

Twice he was the judge of the Chapel Hill Recorder's Court (1933–39 and 1964–68). He also was appointed as the first judge of the Orange County Recorder's Court at Hillsborough on its creation in 1947 and served on that bench until 1963. In 1969 he was elected as one of the four judges of the newly created Fifteenth District Court for Orange, Chatham, and Alamance counties. He was sitting on that court when he suffered a mild attack of angina on 3 Sept. 1969, and he died about three weeks later.

Throughout his career Judge Phipps was active in Democratic party politics in Orange County, serving as county Democratic executive committee chairman for a number of years. When former university president Dr. Frank P. Graham ran in 1950 for election in his own right to his appointive post as U.S. senator from North Carolina, Phipps was one of his most active campaign leaders in that hotly contested primary election battle. In 1963 he was appointed by Governor Terry Sanford to serve as Orange County's representative in the General Assembly, succeeding J. W. Umstead, Jr., who resigned because of poor health.

Of his many civic affiliations, his earliest was as a charter member of Chapel Hill Post No. 6 of the American Legion. In that veterans' group he held almost every local and district office before serving as commander of the legion's North Carolina Department—the elected head of the more than 60,000-member statewide organization. His other primary interest was the University Baptist Church of Chapel Hill, where he was chairman of the Board of Deacons for many years and church moderator at the time of his death.

Many honors came to Phipps through his lifetime in the university community—especially because of his constant involvement in almost every phase of local and civic activities. He was for many years the attorney for the town of Carrboro and for the Chapel Hill–Carrboro Merchants Association. For thirty-nine years he was an active member of the Chapel Hill Rotary Club, serving as president in 1938–39 and as international service chairman for many years until his death. His colleagues in the County Bar Association honored him in 1968 with a silver bowl in recognition of his "41 years of integrity and honor" in the practice of law. He was general chairman of the Orange County Bicentennial celebration in the fall of 1952, an original member and chairman of the Historic Hillsborough Commission, and a founding member and director of the Chapel Hill Historical Society.

In other service areas, he had been Orange County district chairman for the Boy Scouts of America and the recipient of the highest volunteer award given to Scouters—the Silver Beaver. He was chairman of the Orange County Morehead Scholarship Committee and a member of the Aubrey Lee Brooks Scholarship Committee for The University of North Carolina. Among his varied hobby interests were stamp and coin collecting and bird study.

At his death a local editor noted Phipps's conservative instincts and "fierce patriotism" but added: "He saw the law not only as a deterrent to our darker impulses and a restraint on our baser conduct, but as a living, constructive force that could help to shape a better society. . . . He was a man of rock-like principles and he stood as squarely on them as anyone we have ever known. He loved family, God, and the Democratic Party with a passion that is increasingly rare in our times." Chancellor Emeritus Robert B. House of The University of North Carolina wrote of Phipps: "I have never known a man with higher ideals or with a quieter, steadier loyalty to those ideals."