John Wesley Umstead, Jr., legislator and advocate of education and mental health, was born in Durham County, the son of John Wesley, a Confederate veteran, farmer, and politician, and Lulie Elizabeth Lunsford Umstead. His brother, William B., was a congressman, U.S. senator, and governor of North Carolina. John W., Jr., was educated in the Durham city schools and at age fifteen entered The University of North Carolina, where he excelled in history and French. Awarded the Bingham medal for debating in 1908, he was permanent secretary of his class of 1909 and president of the Debating Union. He was a classmate and roommate of Frank Porter Graham, subsequently president of the university. The 1909 Yackety Yack, the yearbook, characterized Umstead as "a speaker, a money-maker, a student, and above all else a worker. He is ultra-emotional, abnormally enthusiastic and a loud laugher; but he is grounded right, and will do something some day, if work counts." 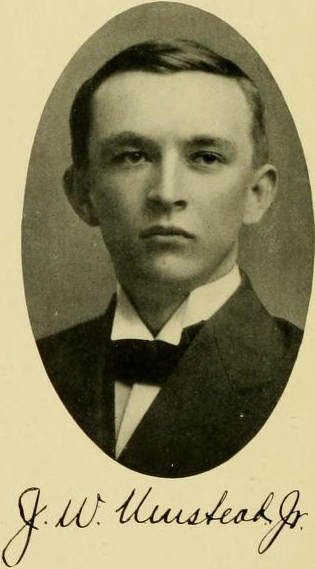 Following graduation he joined the Southern Life and Trust Company in Greensboro and ultimately the Jefferson Standard Life Insurance Company, where he earned admission to the Million Dollar Club in 1953. He became one of Jefferson Standard's most successful insurance executives before retiring in 1955 after forty-three years with the firm.

In 1931 voters sent Umstead to the North Carolina Senate for one term. He then lobbied for North Carolina insurance companies during the 1933, 1935, and 1937 sessions before being again elected to the senate for the 1939 term. Although defeated in a bid for a seat in the North Carolina House of Representatives in 1940, Umstead—representing Orange County—was elected to the house the next year; he served continuously until ill health forced his resignation in March 1963. In the legislature he introduced more than 230 bills and resolutions, of which almost 60 percent were enacted. At one time or another Umstead sat on all major committees in the General Assembly and was directly responsible for some of the most beneficial legislation enacted during his twenty-two-year tenure.

When his son, Captain John W. Umstead III, was killed in action in the Pacific Theater in World War II, Umstead was deeply affected, and the incident changed the course of his life. "When my boy was killed, I figured it was punishment for having frittered away my talents. I decided to devote the rest of my life to public service."

Umstead's major interests as a legislator were education, mental institutions, and the rehabilitation of young criminals (first offenders). In 1945 he was picked to head a small subcommittee to investigate conditions at Dorothea Dix Mental Hospital in Raleigh. He was so appalled by the terrible conditions at all state mental institutions that he made it his lifework to improve services at these hospitals. Umstead was particularly disturbed by the "almost criminal neglect" of the mentally ill, as emphasis was on providing space for the confinement of the emotionally ill rather than on rehabilitating or curing the patient. He succeeded in bringing about many reforms in mental hospitals and in 1962 helped establish at Camp Butner a mental hospital serving twenty-one counties in North Carolina. The state purchased the abandoned World War II camp of 1,700 acres and a hospital building for one dollar and then spent $1.5 million to develop the facility. Umstead also sponsored an Alcoholics Center at Butner and set up the Butner Youth Center—an experiment in the rehabilitation of youthful first offenders. Chairman of the State Hospital Board of Control, he worked tirelessly to raise the standards of medical education and to stimulate the growth of the medical center at The University of North Carolina.

John Umstead had a lifelong desire to achieve equality of opportunity in education for all North Carolinians. He gave unbounded energy and time to the support of a nine-month school term and was the author of legislation establishing twelve nine-month school years for every child in the state. He advocated compulsory attendance in public schools and fashioned the bill that required all children between six and sixteen to attend school, with absences under the supervision of a truant officer. Umstead lightened the load of pupils per teacher by limiting the student-teacher ratio to 30:1. He was a leader in raising teachers' pay and in modernizing the prison system. All of these reforms were permanent and significant forward steps in the cause of public education. For many years Umstead was a trustee of The University of North Carolina and constantly fought for improvements there. From 1933 onward, he furnished free room and board to approximately 125 needy young men who attended the university. He also provided, in memory of his son John, the funds to send two young men annually from a North Carolina orphanage. For his services to the state Umstead was awarded an honorary doctor of laws degree from the university in 1957.

A member of the North Carolina Grange and the Farm Bureau, Umstead voted for increased appropriations for agricultural research, vocational education, and agricultural extension courses. He was a member of the board of the American Fund for Psychiatry, North Carolina Association for Mental Health, American Heart Association, and North Carolina Association for Retarded Children; Kiwanis International, the North Carolina Symphony Society, and Sons of the American Revolution; and the Shriners, Elks Club, and Methodist church. Umstead combined his legislative skills with an idealistic dedication to improve life for his fellow citizens. He reserved his major services for those people who did not vote—"the boys and girls in public schools across North Carolina, the young and old at the mental hospitals which he built, and the students at the University of North Carolina."