Richard Stanhope Pullen, businessman and philanthropist, was born on the modest plantation of his father, Turner Pullen, near Neuse Station, Wake County. His mother, Elizabeth Smith Pullen, was the sister of Richard and Benjamin Smith, prominent merchants in Raleigh's infant years. Nothing is known of his early life and education, for Stanhope Pullen (he preferred his middle name) diligently avoided conversations about himself. Presumably he received some schooling in local academies, but the keen business sense he exhibited as an adult appears to have come from his association with his uncle, Richard Smith.

In 1850 Pullen listed his occupation as merchant and seems to have been employed by Richard Smith, even though he continued to reside on his father's plantation a few miles north of Raleigh. Two years later his uncle died leaving his aunt, Penelope Smith, a comfortable estate but one encumbered with complex business arrangements. With no sons to turn to, Penelope prevailed upon her nephew, who moved to Raleigh and assumed control of her financial matters. Out of love and respect for his aunt and deceased uncle, Stanhope Pullen refused any wages for his services. Through the dark days of the Civil War and the financial woes of Reconstruction, he managed to hold the Smith fortune intact. Penelope Smith planned to reward her nephew with a cash bonus of $4,000 upon her death, but a family dispute erupted when her daughter and primary heir, Mary Jones (widow of Kimbrough Jones) entered into a contract to marry James T. Morehead. Horrified by the idea that Morehead would acquire any part of her estate, she changed her will in 1868 leaving nearly everything to her "faithful agent and friend Richard Stanhope Pullen who has served me very faithfully . . . and relieved me from many annoyances and troubles in my old age." From the bitterness of a family quarrel, Pullen emerged a wealthy man, a condition he turned to maximum advantage during the next quarter century.

Some years before a general prosperity returned to North Carolina, Pullen invested his available cash in Raleigh real estate. He followed a practice of developing neighborhoods by purchasing large squares of property, cutting streets through, and then donating the streets to the city. That approach allowed faster development than waiting for the city to buy or condemn land for roadways. Two of his most prominent neighborhoods included the fashionable residences along North Blount Street and along Elm Street in Oakwood, known for many years as "Pullentown." Other properties in and around Raleigh came into his possession, and by the early 1880s one could not travel very far in the capital without crossing land belonging to R. Stanhope Pullen. 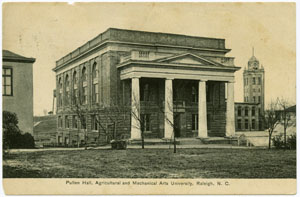 Whether Pullen's great wealth activated his eccentricities or merely afforded him the luxury of indulging in them is difficult to say. His success lay in his initial evaluation of a business deal, for once he had made his investment, he never worried about profit or loss. Pullen detested the details of the business world and could never be prevailed upon to take the presidency or a seat on the board of directors of any corporation. By his own admission, he never lost, or intended to lose, a night's sleep over business. His personality was akin to that of an enlightened despot. To approach him for help often brought a stern rebuff, yet he always saw that his properties were kept in good repair. Complaining tenants quickly discovered that in a quiet and dignified manner the welcome mat had been withdrawn. Pullen's anonymous gifts to the poor and the needy were legendary, but the beggar who came to his door usually left in despair. Old acquaintances were often passed with no sign of recognition only to be greeted with great cordiality upon the next encounter. To those who knew him, "it was Mr. Pullen's way."

A kind and gentle man himself, Pullen was not one to tolerate inconsideration by others, particularly if he were the object of rudeness. On one occasion, a neighbor's dog persisted in moonlight serenades that kept Pullen from his slumber. Peaceful remonstrances to the cur's master failed, so he sought out the owner of the property, purchased his neighbor's house, and issued an ultimatum: the dog or the man had to go. When asked what had happened, Pullen wryly replied, "the tenant is still there, but the dog has changed his mind and decided to move."

While use of his wealth for the benefit of others gave him pleasure, Stanhope Pullen neither expected nor wanted overt expressions of appreciation for his gifts. Basically a shy man, he seemed embarrassed by such displays of emotion. In 1887, when he donated eighty acres to the city of Raleigh for a public park, he considered it gratuitous nonsense that it should be named in his honor. When he gave sixty acres of adjoining land for the North Carolina College of Agriculture and Mechanic Arts (now North Carolina State University), he was more careful. Approached by a delegation from the college and asked for a portrait to hang as a token of appreciation, Pullen, with a gleam in his eye, smiled and said pleasantly, "Well, they'll never get it. Good morning." So far as is known, he never allowed a portrait, photograph, or sketch of himself to be made. The college had to wait until Pullen's death to honor its benefactor through the construction of Pullen Hall.

Stanhope Pullen never married, but he was deeply concerned about young people, especially their education. Among his many charitable donations were timely gifts for Peace Institute (now Peace College) and the State College for Women at Greensboro (now the University of North Carolina at Greensboro). For many years his closest companion was a formerly enslaved person named Washington Ligon, who had worked as Pullen's personal servant and handyman. Many years ago, old-timers in Raleigh recalled seeing "Old Wash" walking alongside his patron as they surveyed Pullen's estates. Periodically the stately gentleman would stop, point his gold headed cane, and "Old Wash" would dutifully mark the spot for a shrub or sapling. In the late 1880s Pullen arranged for his companion to purchase some property in the Method area near Raleigh, where he spent his remaining days. "Old Wash" died in 1893, two years before his benefactor and friend.

About fifteen years before his death Pullen affiliated with the Edenton Street Methodist Church, whose new structure he had helped to build. True to his character, he refused to be pressured into making a donation to the building fund, but when money ran out he simply inquired as to the balance necessary and wrote his check. Pullen remained a communicant of the church for the remainder of his life.

Curiously, because he owned numerous houses in Raleigh, Pullen resided for years in downtown boarding houses. In 1883 he and his nephew, John T. Pullen, moved into a large house at 213 East Edenton Street. There he lived until 1891, when the site was taken for use by the Baptist Female University (now Meredith College), located on the corner of Blount and Edenton streets. Stanhope Pullen spent the last years of his life with his niece, Lizzie Pullen Belvin, wife of Charles Belvin. He died at her residence and was buried in the western section of Oakwood Cemetery between Oakwood Avenue and Polk Street. The News and Observer, 25 June 1895, commented in a moving eulogy that Pullen's philanthropy "will tell the story of the liberal gifts of a plain, honest, unpretentious man, who wanted in a practical way to give happiness and rest to his fellow citizens of this and unborn generations."