John Andrew Ramsay, land surveyor, civil engineer, Confederate soldier, and mayor of Salisbury, was born in Rowan County to Robert and Mary M. Walton Ramsay. Young Ramsay practiced the profession of land surveying and civil engineering until the outbreak of the Civil War. He then joined a battery of artillery known as the Rowan Artillery and on 8 May 1861 was elected its captain. The battery had no cannon at the time, so the company temporarily served as part of the Fourth North Carolina Infantry Regiment. 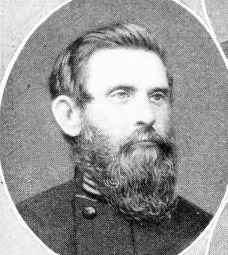 On 20 July 1861, at the request of Governor John W. Ellis, Ramsay turned over command of the company to Captain James Reilly, an officer with previous artillery experience, and accepted the assignment as first lieutenant of the company. The battery became Company D, Tenth North Carolina (First Artillery) Regiment, and was sent to Virginia, where it received its cannon. From here the battery served in General Joseph E. Johnston's Confederate army during the Peninsular campaign and later marched at the head of Stonewall Jackson's army arriving from the Shenandoah Valley to join Robert E. Lee's army at Richmond during the Seven Days' campaign. The battery was attached to General John B. Hood's famous "Texas" Division and was heavily engaged in the Second Manassas campaign.

On 30 Aug. 1862, the second day of the Battle of Second Manassas, Lieutenant Ramsay was wounded when a fragment of an enemy shell struck him on the right knee. Fortunately, the fragment caused only a contusion with no serious injury. In the Battle of Sharpsburg, 17 Sept. 1862, he commanded a section of the battery under the very eyes of General Robert E. Lee and at one point, while going into action, paused to identify with his field telescope a column of distant troops at Lee's request. Reilly's battery also participated in the Battle of Fredericksburg and, while serving with General James Longstreet's corps around Suffolk, took part in General D. H. Hill's unsuccessful siege of Washington, N.C., in April 1863. As a part of Major M. W. Henry's artillery battalion, the battery was engaged on the right flank at Gettysburg on 2 and 3 July 1863. On 7 Sept. 1863 Captain Reilly was promoted to the rank of major, and Ramsay succeeded him in command of the Rowan Artillery as captain. Ramsay's battery served as a part of Lieutenant Colonel John C. Haskell's artillery battalion throughout the Wilderness and Petersburg campaigns of 1864.

Granted a furlough on 1 Feb. 1865, Captain Ramsay went home and was not able to return to his battery before it surrendered with Lee at Appomattox. He was paroled at Salisbury on 19 June 1865. In the meantime, he had been given the post of chief of police of Salisbury by North Carolina's "Carpetbag" governor W. W. Holden in May. On 26 July 1865 he married Margaret L. (Maggie) Beall, the daughter of Burgess Beall of Davidson County and the widow of his cousin, Julius D. Ramsay. The couple made their home in Salisbury and once again Ramsay took up engineering and surveying. Among his accomplishments was the laying of one of the first sewers in the city, the designing of the original building of what was to be the Frank B. John School on Ellis Street, and the supervising of a gang of workers as superintendent of streets.

In 1879 Ramsay ran for the office of mayor on the ticket of the moderate wing of the Republican party and won. The following year he was reelected, but in 1881 he was defeated by the Democratic candidate, M. L. Holmes. Ramsay won again in 1883. He worked to promote the education of the poor but at the time this was unpopular with the people, and he was defeated in the election of 1884, never to enter politics again. He returned to surveying and engineering until his death. He was buried in Chestnut Hills Cemetery, Salisbury.

Walter Clark, ed., The Histories of the Several Regiments and Battalions from North Carolina, vol. 1 (1901).

Ramsay, John A, and Jno Beard. 1890. Public [sic] speaking!: the Fusion candidates for the legislature and county offices will speak at the following places on teh dates named. Salisbury, N.C.?: s.n. https://www.worldcat.org/title/pubilc-sic-speaking-the-fusion-candidates-for-the-legislature-and-county-offices-will-speak-at-the-following-places-on-the-dates-named/oclc/757820685 (accessed August 11, 2014).