William George Randall, artist, was born near Table Rock in Upper Creek Township, Burke County, to John and Susan Webb Randall. John was from Buncombe County, where he and Susan lived for some time and where their daughters, Adeline and Elizabeth, were born before their son. From infancy William was left to the care of his widowed mother, who returned to Burke County, where her brother, Thomas Monroe Webb, lived and served at one time as sheriff.

The young boy early began to help his mother and sisters and plowed when he was hardly large and strong enough to "lift the plough around the end of the furrow." In his childhood he grew to love books and had as a teacher Miss Betty Craig, who fostered this love; she taught in a school held in the home of Dr. John McDowell on John's River. Afterwards he attended a Peabody school three miles from his home. Years later Randall was to paint a portrait of George Peabody, copied from a Mayall daguerreotype and now owned by the University of North Carolina at Greensboro. He continued to help the family and worked at odd jobs, farming, and brick making. At sixteen he entered the Table Rock Academy, opened by the Reverend Robert Logan Patton, who had recently returned from Amherst College. Patton encouraged young Will's talent for drawing and showed some of his work to Harvard geologists who were visiting Table Rock. They sent him the first art materials (paper and crayons) that he had ever owned. He worked in the yard and garden of the Patton home and made a picture of Winnie, the little daughter. Later (ca. 1890) he did a charcoal drawing of Mr. Patton. Randall was interested not only in art but also in history and, asking many questions, he continued to learn from Patton. When he was seventeen and eighteen, Will taught at a free school in Lincoln County at Lowesville.

Determined to go to the state university, he set out in the fall of 1880 to walk to Chapel Hill from the home of his sister, Elizabeth, who had married a Beck of Burke County. Two nights on the way were spent with people known to Robert Patton. At Chapel Hill he was fortunate in being interviewed by the university president, Kemp P. Battle, who, in a short sketch written on 16 Dec. 1906, recalled him as a "pale-faced slender figure, modest and unassuming, but with determination in every feature." His uncle became his surety; Deems Fund money, later repaid in full, was borrowed. The Dialectic Society paid him for being librarian, the first year a salary had been given. In the Southern Historical Collection is a notebook he kept, with many drawings and illustrations, for a zoology course under Frederick Williams Simonds. Randall, who was graduated with high standing in the class of 1884, was class prophet, and James Lee Love was president and valedictorian. Randall's graduating speech on "North Carolina Folk Lore," a "humorous and able disquisition," met with "unusual applause." Later, when the university's enemies were requesting state legislators to cut appropriations because they said it catered only to students of well-to-do families, Randall wrote a beautiful tribute to the university and to Battle. "President Battle made me feel quite at home and I felt as if he had been waiting for the opportunity to make me welcome. . . . I knew the moment I saw his face that I would get sympathy and encouragement. . . . If a young man fails to get along at the University it is his own fault. It is not a rich man's college—it is the poor boy's college: and that State cannot spend money in any other way that will make such large returns." Battle called him "one of the worthiest of all the graduates of the University." 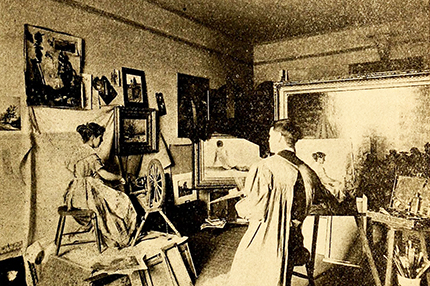 After graduation Randall took charge of the Marion academy, where he met Annie J. Goodloe, of Warrenton, who was an assistant at the school. They were married in 1885. She encouraged him to develop his artistic talent and, after teaching for two years "in accordance with his contract with the state when he secured a county appointment to the University," he went to New York to study at the National Academy of Design. The Right Reverend Theodore B. Lyman, bishop of the Protestant Episcopal Diocese of North Carolina, also encouraged him to study after seeing his work while he was in Marion. While studying at the National Academy he taught drawing and opened a studio but left in 1888 to teach mechanical and free-hand drawing and descriptive geometry at the University of South Carolina. Turning down the offer to become principal of a school in McKinney, Tex., he returned to his native state after a year, as his wife urged him to continue painting. Randall opened a studio in Raleigh in 1889 and did a great deal of portrait painting. Feeling that he needed a broader field, he went to Washington, D.C., in 1893 and had a studio in the Corcoran Building. Then he went to Paris to study and paint; he also traveled and studied in other cities on the Continent and in London. The North Carolina University Magazine of Jan. 1895 contains an article he wrote from Paris on 1 Dec. 1894 about the Thanksgiving dinner of the American Art Association. Randall went back to Washington, but the climate was too harsh for him and he returned to Raleigh. In the archives of the University of North Carolina at Greensboro is a copy of an address he gave to the North Carolina Teachers' Assembly at Asheville on 23 June 1896. Titled "The Relation of the Formative Arts to Liberal Education," it is particularly interesting today as now our state colleges do provide for the study of subjects as he wished for then: architecture, sculpture, and painting.

In 1898 Randall built a home on the crest of the Blue Ridge at Blowing Rock. For his health his physician sent him to the Southwest, where he spent several months at Sante Fe, N.Mex., but was not helped and so returned to Blowing Rock. On the back of a photograph of his wife in the archives at Greensboro is the statement that she served "as Registrar, English teacher, supply clerk around 1900 and for some years. Her husband, who died of T.B. while she was here, was an artist. . . . His studio was in the attic of Administration." Randall died at Blowing Rock and his body was taken to Washington, D.C., for burial in Glenwood Cemetery, 2219 Lincoln Road, NE, Lot 302 of Section D. His grave site is 11 and that of his wife, who died at age sixty-eight on 17 Apr. 1918, is 12. Also on the lot are the graves of a stillborn infant and William George Randall, Jr., age three. Another child who died as an infant is listed by Patton.

Randall did some landscape and genre painting, but it was in portraiture that he excelled. In the archives at Greensboro is an undated newspaper clipping that aptly describes his color as "good, in the pictures of men rich and warm, in those of women tender and delicate, all that is natural and correct." According to Patton, there are more than one hundred of his paintings owned by various people. Cuthbert Lee lists twelve portraits and a replica. The North Carolina Department of Cultural Resources has listed fifteen portraits owned by the state, some in storage, some hanging in state buildings in Raleigh. Five of these are also listed in Lee. The University of North Carolina owns nine, but the attribution of the three Mason ladies is questionable. At the University of North Carolina at Greensboro are seven portraits of men, all signed by him. There are four of young ladies that look like his work, but his signature is not discernible. The Greensboro Public Library owns a portrait.

A portrait of Randall, painted by a French artist when he was studying abroad, was presented by his niece, the late Mrs. Nana Beck Daugherty, of Jacksonville, Fla., to Oak Hill School on the Table Rock Road, with which the small Table Rock School he attended was consolidated. An unveiling was held on 16 Nov. 1943 with a display of all of his work that could be found. All known relatives were invited and some participated in the program.

My grandmother was Dorothy

My grandmother was Dorothy Branch Robinson. She was the Great Niece of Will Randall. She gave me a portrait he painted of his sister (my Great-Great Grandmother) Elizabeth Randall Beck. It looks so real, almost like a photo. Wish I could see more of his works.