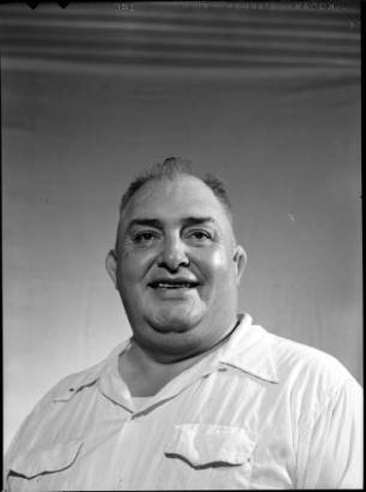 Osley Bird Saunooke, chief of the Eastern Band of Cherokee Indians and world heavyweight wrestling champion, was born near Cherokee, N.C., the son of an Indian father and an English mother. He was descended from a lineage of Indian chiefs for five generations. Saunooke attended Haskell Institute in Kansas, where he played tackle on the football team. He served in the U.S. Marine Corps, drove a taxicab, and worked in the wheat fields and on the railroad in the Midwest.

During the depression he began wrestling professionally and at one time weighed in at 369 pounds. He won the heavyweight title in 1937 from Thor Johnson and held it for fourteen years. After taking part in more than five thousand matches, including seventeen main events in New York City's Madison Square Garden, he retired from the ring in 1951 and returned to Cherokee to enter business.

Saunooke served as tribal chief of the Eastern Cherokee from 1951 to 1955 and from 1959 to 1963. He also was elected vice-president of the National Congress of American Indians. Chief Saunooke is credited with developing a model Indian reservation at Cherokee, and towards this end he spent considerable time in Washington, D.C., where he promoted legislation in Congress to benefit his people. In 1935 he married Bertha Smith, and they became the parents of five children.

My Dad went to Chicago by

My Dad went to Chicago by jumping a rail car in 1932 to work the Worlds Fair. When he got to Chicago he started driving a cab and met Osley. They were both fighters but my Dad was a boxer and Osley a wrestler. Soon after meeting they started rooming together and did so until 1934. It was the start of a friendship that lasted until Osley’s passing in 1965. When they left Chicago at the end of the fair Osley returned to Kansas with my Dad and they signed on to a threshing crew ran by my granddad. He stayed with my grandparents as a part of the family until he returned to wrestling the following year. As a part of the family he was simply called “Bill”. When I was a child my sisters and I knew him as “Uncle Osley”. Until he passed away he never missed an opportunity to stop by our house, sometimes 3 or 4 times a year. He sometimes had his wife with him and occasionally one of his older daughters and sometimes other tribal members. We, through the years vacationed at his place on the banks of the Oconaluftee near Cherokee. The last time I saw him was in 1962 when I stopped to see him in route to Camp Lejeune. I was also very disappointed to learn his son, O. B. Saunooke, Jr, we knew as “Butch” passed away at such a young age. We were friends in our younger years. My heart goes out to this wonderful family but, they are fondly remembered.

Dear Mrs. Armstrong, I read your comment on 04/23/17 concerning Olsey Bird Saunooke, former Chief of the Eastern Band of the Cherokee. You are related to him. I grew up near Sand Hill School near Asheville. My father was principal at Sand Hill for years. He was born and grew up in Bryson City. My mom was Lura McCracken Marr. She was the daughter of Dr. CM McCracken who was born at Crabtree Ironduff in Haywood Co.. One of his sons was Dr. Clayton McCracken, a long time dentist in Asheville. He was a hunter and had a good string of hunting dogs. He developed a very good relationship with Chief Saunooke and they frequently hunted together in the Smokies. One day, while on a hunt together, Chief Saunooke told my uncle Clayton that they were cousins. Years later, when I was a young lad, my uncle related this story to me. Now as an old man I am trying to find out more about my ancestors. I am hopeful that you might have more info as to how I might be related to your people. As a kid, I heard " fireside stories" about the "trail of tears" and that an Indian woman who was a friend of the McCracken family on Crabtree gave up a baby child to the McCracken family, for them to care for rather than have the baby subjected to the forced march to Oklahoma. This is all I can remember. I do know that I, as well as some of my aunts and uncles have certain native characteristics. I am frequently asked by Natives out here in Arizona, where I currently reside , if I have Native blood. If you could shed some light as to how the Chief could tell my uncle that we were cousins, I would very much appreciate it. Respectfully, Joe Marr

Osley Bird Saunooke was my

Osley Bird Saunooke was my father's first cousin (Their mothers were sisters). My great aunt Minnie (Osley's mom) was listed here as English but she was part Native American, as the law, at the time they married, said that Minnie and Will could not marry unless she was part Native American. So they testified before the Congress of the time that this was so and they were allowed to marry.