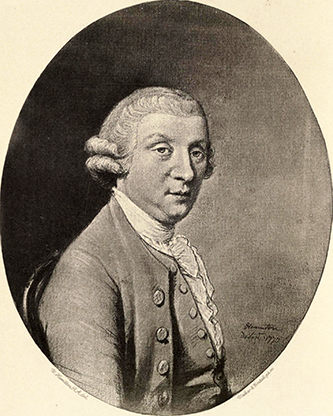 George Augustus Selwyn, landowner, was born on his family's county estate near Maston in the Cotswold Hills overlooking the Severn Valley in England. His father, Colonel John Selwyn, a man of education, ability, extensive influence, and ample means, was well known in the courts of the Georges; Selwyn also served as a member of Parliament for Gloucester (1734–47) as well as the treasurer of Queen Caroline's pensions. George's mother, Mary, the daughter of General Sir Anthony Farrington of Kent, has been described as a woman of unusual beauty, vivacity, and wit. She was a Woman of the Bed Chamber of Queen Caroline. After his father and an older brother died in 1751, George inherited large tracts of land in Piedmont North Carolina that the Crown had granted to his father in 1737.

George Selwyn's early education was at Eton College and continued at Hart College, Oxford. In 1745 he was forced to withdraw from Oxford without a degree to escape expulsion for using a chalice as a drinking cup at a student's party. Two years later, however, he entered Parliament where he remained until 1780. As a member of Parliament, Selwyn was silent and inactive, showing no serious interest in affairs of state. In general, he never exerted himself over either his business or his land interests, delegating this to agents.

The town of Charlotte, N.C., was being established on a small part of Selwyn's land about the time he inherited it. The whole tract was known as "The Selwyn Grant." He appointed Henry E. McCulloh, Abraham Alexander, Thomas Polk, and John Frohock as trustees and directors of the new town. Frohock, Alexander, and Polk were also commissioners to hold land in trust for the county of Mecklenburg on which to erect a courthouse, prison, and stocks. Because the land was a grant from the king, they felt obliged to settle one person to every 200 acres. McCulloh saw that the interest of his employer, Selwyn, would be advanced by locating the county seat on his lands, so Charlotte was formally made the county seat by act of Assembly in 1766. In 1767 Selwyn had his Carolina land surveyed by McCulloh as his agent, and it was found that the tract contained over 200,000 acres.

Even though he never visited his vast possessions in America, Selwyn showed a great deal of interest, as reflected in his correspondence and through his agent's activities. He also kept abreast of the movements of the British general, Lord Charles Cornwallis, through the Carolinas during the American Revolution.

In England Selwyn's reputation rested on his unusual wit and humor, which he was believed to have inherited from his mother. An early member of the leading London clubs, he was widely known and frequently quoted. He was on friendly terms with statesmen, politicians, and literary men, as well as with the court circle.

Nevertheless, Selwyn evidently lived a lonely personal life; he never married and had no near relatives in his last years. He adopted a girl named Maria Fagniani because of his fondness for children—a trait that he generously demonstrated frequently over a long period of time. There was a dispute between the Duke of Queensbury and Selwyn over the paternity of the girl, and both left large sums to her at their deaths, but recent studies suggest that Selwyn was not her father.

In his later years, which he spent in London, Selwyn suffered from gout and dropsy. He died at his home in St. James's. There is a portrait of him at Castle Howard painted by his friend Sir Joshua Reynolds showing Selwyn with Frederick, fifth earl of Carlisle, and with his beloved dog, Raton. Selwyn is depicted as a handsome man with a periwig and dressed in the elegant and expensive style of the day—a velvet suit, silk hose, lace frills, and a fine stack buckle.

Oscar Sherwin, A Gentleman of Wit and Fashion: The Extraordinary Life and Times of George Selwyn (1963 [portrait]).

Selwyn, Nick. "The Selwyn Family and the development of Richmond. A Talk given by Nick Selwyn to the Richmond Local History Society 2009." The Vineyard, Richmond. 2009. http://www.thevineyardrichmond.info/selwyn-family.html (accessed August 5, 2013).