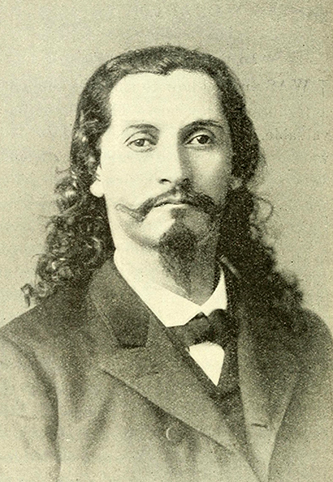 Nimrod Jarrett Smith, principal chief of the Eastern Band of Cherokee Indians from 1880 to 1891, was born near Murphy. His mother was Cherokee and his father was a white man who acted as translator for the Reverend Evan Jones, a Baptist missionary at Valley Town before the removal of 1838–39. Smith acquired an adequate but probably informal education and married a white woman by whom he had several children. At age twenty-five, he enlisted in one of the Cherokee companies of the Confederate Legion organized by William Holland Thomas, a white trader among the Cherokee, and served as first sergeant of Company B, Sixty-ninth North Carolina Infantry, until the close of the Civil War.

In 1868 Smith was clerk to the council that drafted the first Eastern Cherokee constitution. He came to be highly respected as a public servant, and when Principal Chief Lloyd Welch died in office in 1880, the Eastern Cherokee elected Smith to complete the unexpired term. James Mooney, a late nineteenth-century anthropologist, met Smith while he was serving in this office; he described him as "a splendid specimen of physical manhood, being six foot four inches in height and built in proportion, erect in figure, with flowing black hair curling down over his shoulders, a deep musical voice, and a kindly spirit and natural dignity."

When Smith became principal chief, the Cherokee were without an agent, their education had been neglected, and their legal position was far from definite. On 31 May 1881 Smith signed a contract with Indiana Quakers for the establishment and maintenance of schools that were to be supported by the annual interest of the trust fund held by the U.S. government for the North Carolina Cherokee and by contributions from the Western Yearly Meeting of the Society of Friends. With some initial aid from the North Carolina Meeting, the Indiana Quakers led by Thomas Brown began work immediately, and by the end of 1881 they had established a small training school in Cherokee and day schools in other settlements. In 1882 Congress appropriated funds for the establishment of an agency in Cherokee and for conducting a census that was completed in 1884.

As principal chief Smith devoted most of his time to the Eastern Cherokee's legal battles. Hoping to gain access to the annuities and other trust funds held by the U.S. government for the Western (Oklahoma) Cherokee, the Eastern Cherokee filed suit in the court of claims against the United States and the Cherokee Nation West in 1883. Two years later the court handed down a decision adverse to the Eastern Cherokee, and the U.S. Supreme Court upheld the decision in 1886. The courts ruled that the Eastern Cherokee had dissolved their connection with the Cherokee Nation by their refusal to move west. The decision deprived them not only of the trust and annuity funds but also of their tribal status and consequently left them in an extremely ambiguous legal position. Furthermore, the Eastern Cherokee had aroused hostility among neighboring whites in the 1880s by switching their loyalty from the Democratic to the Republican party, an act that made their position even more precarious. In an effort to protect the Cherokee, Chief Smith employed attorney Fred Fisher of Bryson City to draw up an act of incorporation (such as businesses used) for the Eastern Cherokee Indians. The act was ratified in March 1889 and a state charter was issued providing that "the North Carolina or Eastern Cherokee Indians, resident or domiciled in the counties of Jackson, Swain, Graham, and Cherokee, be and at the same time are hereby created and constituted a body politic and corporate under the name, style, and title of the Eastern Band of Cherokee Indians, with all the rights, franchises, privileges, and powers incident and belonging to corporations under the laws of the state of North Carolina." Thus the North Carolina Cherokee became a corporation and adopted corporate procedures and regulations as their legal system.

With the legal position of the Cherokee clarified and their position secured, Chief Smith retired in 1891. He died two years later on Qualla Boundary.

My great-grandmother was Lydia Roberts. Her sister Mary Emmaline was Nimrods wife and mother to his children.

I am a decendant of Chief

I am a decendant of Chief Nimrod Jarret Smith through Caroline Ethel Smith(Aka Callie)Knotts and her sister Margret Louiza Smith(aka Hannah) Knotts both were married to Charles Henry Knotts my Fathrr James William Morris Knotts son of Charlie &Caroline stepson of Charlie & Hannah Knotts.
Morris brother was Roland Knotts
Morris half brother was Lee Knotts & his half sister Janie Knotts Ready was Hannah children
Grandmother Hannah died 1954, I was born 1947 and have memories of this petite, firmly speaking powerful woman .

Hello cousin! I just discovered Nimrods wife was Mary Emmaline Roberts, my great great Aunt. Her sister was my great grandmother Lydia Roberts. They were both daughters of Richard Roberts of Cherokee County.